When three Manitoba skips and one from Alberta decided to team up for the upcoming season, there were a number of questions? Who was going to sweep? Who’d call the game? Who would throw last rock? 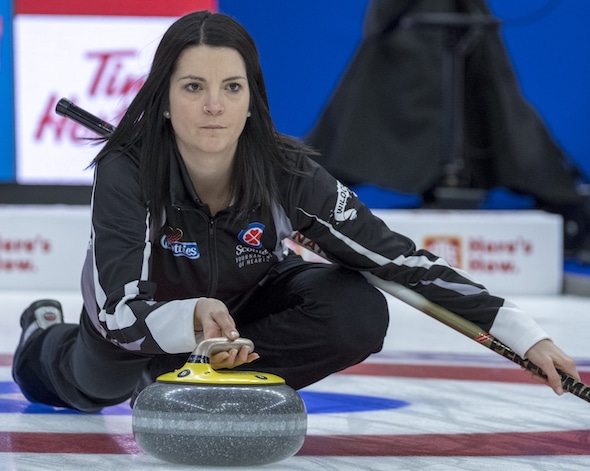 After a tune-up bonspiel at the Granite Club in Winnipeg didn’t finish well, the foursome of Kerri Einarson, Val Sweeting, Shannon Birchard and Briane Meilleur regrouped and hit stride, winning the Stu Sells Tankard this past weekend in Oakville, Ont.

They also got their revenge on Stern in the B-Event final, earning their spot in the quarters.

Aside from some early season confidence, the win earned Team Einarson, based in Gimli, Man., $7,500 and 54.027 points on the Canadian Team Ranking System, and also World Curling Tour Order of Merit. Tirinzoni earned $4,000 for their second-place finish.

On the men’s side, Switzerland’s Yannick Schwaller took home the top prize, defeating Wayne Tuck Jr. (Strathroy, Ont.) in the final. Schwaller earned $7,500 while Tuck and his team took home $4,000.

Also of interest in the men’s draw was the new-look John Epping team, which now features Mat Camm, Brent Laing, and Craig Savill. Epping qualified through the A-draw, before losing to Tuck Jr. in the semifinal. The Toronto foursome earned its first $2,750 of the season, along with 29.386 CTRS points.

Across the country at the HDF Insurance Shoot-Out in Edmonton, Casey Scheidegger of Lethbridge, Alta., took home the title with a 6-4 win over Russia’s Alina Kovaleva. Scheidegger, Cary-Anne McTaggart, Jessie Scheidegger and Kristie Moore dropped their first game, before winning six straight on their way to the championship. The win was worth $8,000 and 40.045 points.

Along the way, they knocked off Chelsea Carey’s new Edmonton team in the quarter-finals, and another Edmonton team, skipped by Kelsey Rocque, in the semifinal. Rocque took home $3,000, while Carey pocketed $2,000.