Canada returned to the international curling stage in grand fashion on Sunday. Canada’s men’s, women’s and mixed doubles teams pulled off historic feats at the Curling World Cup. Each team won its corresponding final to become the first-ever winners of each event. It will also go down in history as the first time one nation has swept all three events. 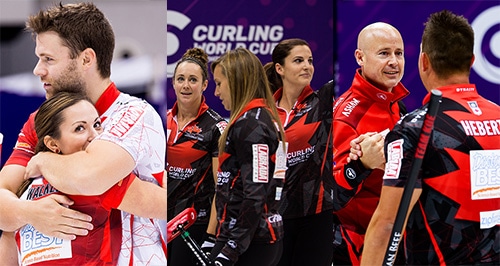 Laura Walker (Edmonton) and Kirk Muyres (Saskatoon) picked up the first of Canada’s three gold medals at the Suzhou Olympic Sports Centre with a victory against Sarah Anderson and Korey Dropkin of the United States. The American team had been undefeated up until the final.

The USA opened the game up with a score of two and Canada replied in the second with a single point. Both Anderson and Walker had opportunities to score multiple points with their last shots in the third and fourth ends respectively, but settled for singles.

But the tide turned in Canada’s favour in the second half of the game, starting with the fifth end. Anderson attempted a hit and roll, but her shot was all hit and no roll. She nosed the Canadian stone which provided Walker and Muyres with a steal of three and its first lead of the game at 5-3. The American had a chance to tie the game in the sixth, but the shot was off and Canada tacked on a stolen point. They added another steal of one in the seventh and ran Anderson/Dropkin out of rocks in the eighth to win.

“It was a great battle out there. The States played amazing and put a lot of pressure on us early and I just thank my partner for keeping me in it and keeping us in it. We hung on and it feels great,” Walker said.

Homan, vice-skip Emma Miskew, second Joanne Courtney and lead Lisa Weagle blanked the first end and set up a score of two in the second with a draw. In the third, Homan slipped her final shot behind cover for shot rock, which resulted in a failed runback attempt by Hasselborg and a steal of one for a 3-0 Canadian lead.

Canada forced Sweden to one in the fourth end for a 3-1 lead halfway through the game. Sweden trailed, but continued to apply pressure on the Canadians by forcing Homan to make a double for one in the fifth end and picked up two in the sixth to claw back in at 4-3. Canada managed to blank the seventh end and maintained control of the hammer coming home. In the eighth, Sweden made the most of the five-rock free guard zone by putting lots of granite in front of the house, but Homan and her team secured the victory by navigating a difficult takeout into to score three.

“It’s really exciting. It’s the first event of the year and I’m really proud of my teammates,” Homan said shortly after the game. “It was a grind, both teams played so well. Anna’s team was phenomenal right till the end and we had to make a tough one at the end with a great line call and great sweeping, so I’m just really proud of our team.”

Koe and his team from Calgary played a sound game in the final, never letting the up-and-coming Norway team score more than one in any given end to win 6-5.

Koe and Walstad jumped at the opportunity to get the game started by playing aggressively. Koe, vice-skip B.J. Neufeld, second Colton Flasch and lead Ben Hebert were sitting two which forced Walstad to hit for one in the first end. Canada’s biggest end came in the second when Koe delicately picked Norway’s rock to the back of the house and scored three. In the third, Norway was forced to take one and Canada added two in the fourth for a 5-2 lead at the halfway mark.

The second half was a game of forces as each team only scored one with the hammer until the eighth end. Canada, leading 6-4, kept the playing field open in the last end and just needed to remove a Norway rock for the win. Despite giving up the single point, Canada won the game to become the first-ever men’s champions at a World Curling Cup event.

“That was a big end,” Koe said of the three points scored in the second. “After that we managed to keep control. We weren’t really in too much trouble in any ends. He had an unfortunate one on his last, I think it picked otherwise we might have only gotten two. But we got a break there, we capitalized and we played solid.”

Teams Koe and Homan each take home $20,000 for winning the final, plus an additional $7,500 in round-robin earnings.