Canadian curling stars were big winners at the 2018 Canadian Sport Awards on Thursday night in Ottawa. 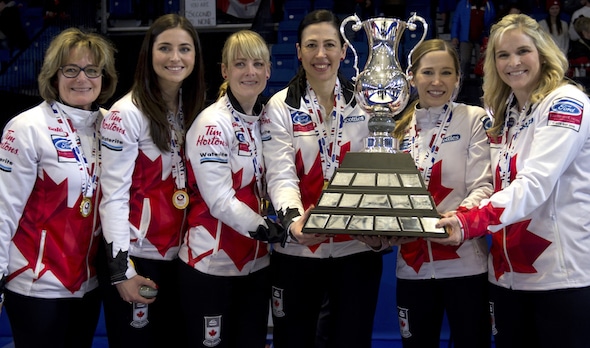 The 41st edition of the CSA — an event that was held for the first time since 2012 — honours the top Canadian athletic performances over the past 12 months, in addition to legacy awards honouring a body of work over a career.

Team Jones won the Scotties Tournament of Hearts Canadian women’s championship in early February in Penticton, B.C., and then followed up with a perfect 14-0 record to claim gold at the Ford World Women’s Curling Championship in North Bay, Ont.

“We had such an amazing 2017-18 season together, and being able to win this award, considering how outstanding the other nominees were, makes it even more special,” said Jones. “We’re absolutely thrilled, honoured and humbled by this, and truly thankful to AthletesCAN for their consideration.”

Officer was a double winner on Thursday as she won the True Sport Award, which “recognizes and celebrates a Canadian hero who, in the pursuit of sporting excellence, has demonstrated values such as dedication, perseverance, sportsmanship, respect for others, and a true love of sport.”

Officer stepped away from competitive curling this past off-season, having won six Scotties titles (tied for the most with her longtime skip Jennifer Jones as well as Colleen Jones), two world championships and Olympic gold in 2014.

“I can’t tell you what a surprise it was just to be nominated in this category, considering the amazing athletes we have in our country, and then to win it was just an honour beyond belief,” said Officer. “I’ve had so many wonderful experiences in the sport of curling, and been able to share those experiences with my best friends, so I feel beyond grateful to receive this award.”

Canada’s Olympic gold-medal winning pair of Lawes and John Morris was nominated in the Winter Sports Partners of the Year category, but lost out to figure skaters Tessa Virtue and Scott Moir.

“As an organization, we just couldn’t be prouder of our athletes who were honoured at the Canadian Sport Awards, both as award winners and as nominees,” said Katherine Henderson, Chief Executive Officer of Curling Canada. “They all worked extremely hard to reach peak-performance levels during the 2017-18 season, and provided inspiration for young curling athletes across the country.”

For more information, and the full list of award winners, go to athletescan.com/en/news.