When Kerri Einarson and Val Sweeting announced they’d be teaming up for the 2018-2019 season, most curling fans thought that would be a formidable back-end combination, regardless of who skipped. When the announcement also mentioned they’d be bringing on two more skips to play front end, those same curling fans started to scratch their head and wonder how, or if, that was going to work.

Out of the gate, it appears that it works. 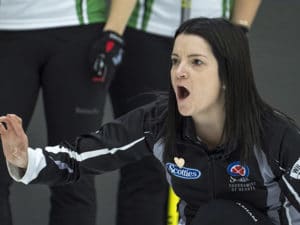 Through four events, Winnipeg’s Team Einarson, with Sweeting, Shannon Birchard and Briane Meilleur have three victories, including last weekend’s Mother Club Fall Classic in Winnipeg. The foursome went undefeated through the pool play, and clinched the championship with a 7-0 victory over Allison Flaxey (Winnipeg) in the final. The team took home $2,000 and 31.131 points, giving it an early lead on the Canadian Team Ranking leaderboard. Flaxey took home $1,600 and 22.829 points.

On the men’s side, Tanner Lott (Winnipeg) beat the USA’s Mark Fenner in the final, to claim the $1,800 final. Lott, playing with his brother Colton (a two-time Canadian junior champion), Kennedy Bird and Wade Ford, lost only one game in the pool play before running through the playoffs. They’ll add 30.600 points to their ranking on both the CTRS and and World Curling Tour Order of Merit.

Jacqueline Harrison and Jo-Anne Rizzo, both with new-look Toronto-based teams, were semifinalists and each took home $1,350 and 19.450 points.

Many of the top teams took the week off to rest up and prepare for this week’s Grand Slam of Curling event in Chatham, Ont. The Princess Auto Elite 10 begins Wednesday.