KELOWNA, B.C. — Expectations were high for the home team, and the opening day did nothing to dampen those expectations at the 2018 Winn Rentals World Mixed Curling Championship. 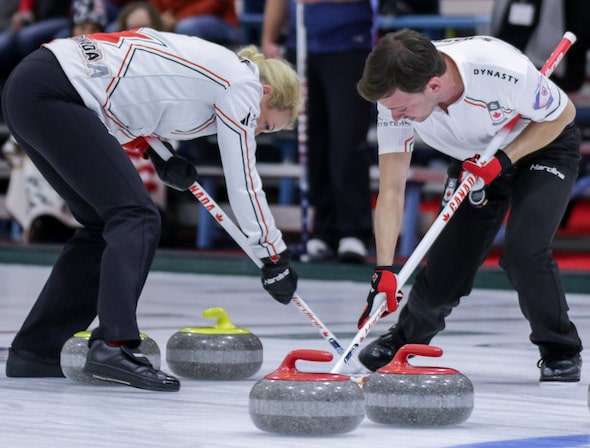 Mike Anderson’s Canadian team, representing the Thornhill, Ont., Curling Club rolled to a pair of victories Saturday at the Kelowna Curling Club, capping its day with a 9-2 victory over Slovenia’s Tomas Tisler.

“The two wins were huge right off the bat,” said Inglis, who, like Anderson is wearing the Maple Leaf for the second time in her career; both played at the 2009 Winter Universiade in Harbin, China. “It’s our first time playing together at a world championship, and even though we come in as favourites as Team Canada, we really need to show up with our ‘A’ game. It’s been 10 years since Mike and I have played at a world event, so there still going to be some nerves. So to come out of today with two wins is huge for our team and for our confidence going forward.”

Team Canada controlled Saturday evening’s game from start to finish; a first-end deuce was followed up in short order with a stolen single in the second, and then a steal of four more in the third that put the game out of reach for the Slovenians, who dropped to 0-2.

“That’s what’s fun about this field; it’s not like the world men’s and women’s championships where you know the players (from other countries), you’ve probably played against them in Tour events,” said Inglis. “Here, there are very few players who we’ve played against ever. So we just try to come out with our best game; that’s all we can do.”

Saturday was the lone two-game round-robin day for Canada; it will play single games Sunday through Thursday before the playoffs begin on Friday.

Canada’s next game is Sunday at noon PT against Norway’s Ingvild Skaga (1-0).