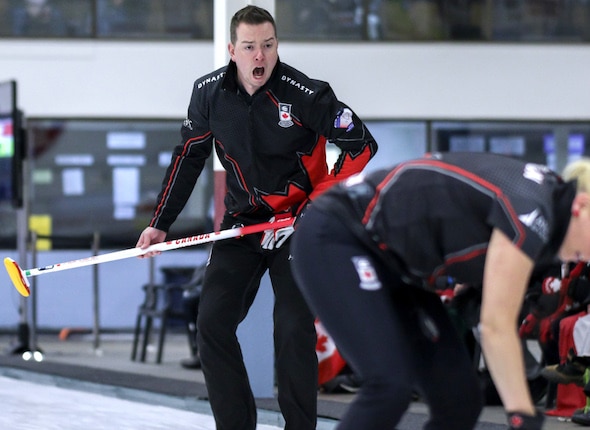 Canada’s Mike Anderson team, representing the Thornhill, Ont., Curling Club, did not have first-end hammer for the first time in the 2018 championship, and Norway’s Ingvild Skaga took advantage, scoring three.

The Norwegians never looked back, handing Canada its first loss, a 5-4 setback at the Kelowna Curling Club.

With the loss, Anderson, vice-skip Danielle Inglis, second Sean Harrison, lead Lauren Harrison and coach Jim Waite dropped to 2-1, while Norway, fourth-place finishers with the same lineup a year ago in Champéry, Switzerland, improved to 2-0 in Group D. The top three finishers in each of the four groups will make the playoffs.

Norway was able to take advantage of a first-end break when a double-takeout attempt by Inglis failed to remove one of the Norwegian stones, and left it dead-buried behind a corner guard. It didn’t get any better from there for Canada. 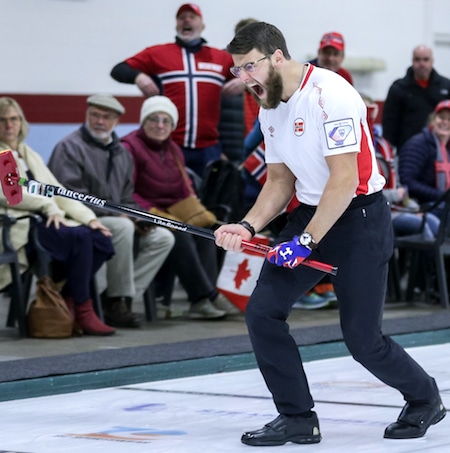 “We just got off to a bad start, got our angles a little bit crossed in the first end,” said Anderson. “The ice was a little bit straighter than we’d seen and it caught us a little bit. Giving up three is tough to come back from.”

The Canadians hung tough, though, getting two back in the second end. But the teams would score nothing but single points the rest of the game, with Norway holding a one-point lead and last rock in the last end. Two hogged rocks, from Lauren Harrison and Inglis, all but ended the Canadian hopes for a steal.

“I don’t think it was by anybody’s imagination our best game, so to keep it as close as we did with our ‘B’ game was encouraging,” said Anderson. “Those guys finished fourth in this event last year, they’ve been here before, obviously. So to not have our best game, but give them a (tough) game, that was good. Their third (Skaga, who calls the game) and fourth (last-rock thrower Wilhelm Naess), they were tough to beat, whether you’re playing with your ‘A’ game, ‘B’ game, ‘C’ game, whatever. They were going to be tough today.”

Canada now has a length break before returning to the ice on Monday at 4 p.m. PT against Japan’s Taisei Kanai (1-1). The team was holding its friends and family dinner on Sunday night.

“We’ve been together for eight years, and we’ve lost lots of games so far,” said Anderson with a smile. “At the end of the day, you have to lose before you learn how to win. It took us seven years to learn how to win, so this one won’t set us back too much.

“At the end of the day, it’s awesome to have the crew we have here with us. We have 20 or 25 people out here who came to support us, and we have four more (round-robin) games and hopefully four games in the playoffs, and away we go.”

Late Saturday night, Canada had completed a perfect opening day in Kelowna with a 9-2 win over Slovenia’s Tomas Tisler.