KELOWNA, B.C. — A world championship is being contested at the Kelowna Curling Club this week, but there’s a logo on the wall at the away end that is a vivid reminder of Kelowna’s biggest-ever curling event, half a century ago. 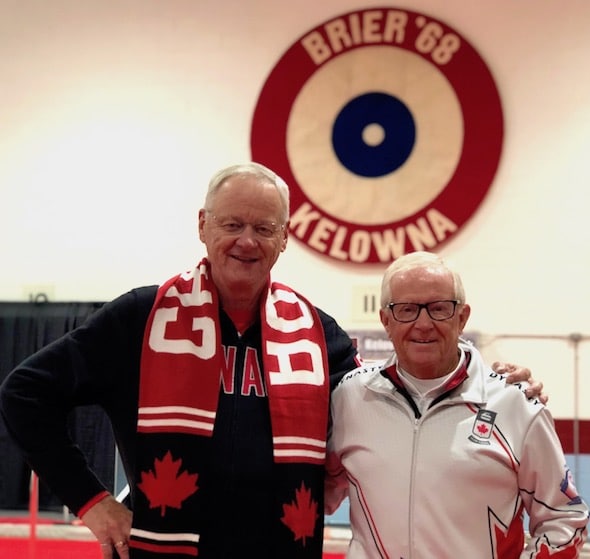 Jim Anderson, left, and Jim Waite are back in Kelowna, where they played in the 1968 Macdonald Brier.

The 1968 Macdonald Brier was contested at Kelowna’s Memorial Arena — just a 15-minute walk due south from the curling club — and while the star of the show was Alberta’s Ron Northcott, who claimed his first of back-to-back Brier titles with a 10-1 record, two other players from that Canadian championship are here this week with more than a passing interest in what’s transpiring at the 2018 Winn Rentals World Mixed Curling Championship.

Jim Waite — who played second for Don Gilbert’s Ontario team in 1968 — is coaching the Canadian team this week in Kelowna, a team that improved to 4-1 on Tuesday morning with a 10-1 paddling of New Zealand’s Dave Watt (0-4).

And Jim Anderson, the father of Canadian skip Mike Anderson, played second in 1968 for the New Brunswick foursome skipped by Jim Ayer.

It really is a great experience,” said Waite, a longtime coach of various Canadian national teams. “I’m not sure the rest of the team was aware that this is such an important place for Jim’s and my past But when I came in and saw that logo, the memories came back right away.” 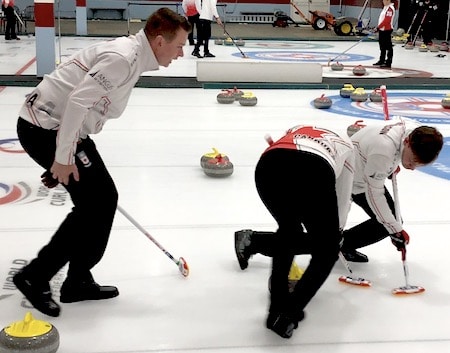 Waite’s Ontario team, in fact, was the only one that bested Northcott, who finished atop the field with a 9-1 record.

“We were tied coming home and there were a lot of rocks out front,” recalled Waite. “He (Northcott) had to play two raise takeouts to get our rock out and he missed them both by just a hair.”

Ontario and Anderson’s New Brunswick team would finish with identical 6-4 records. Interestingly, Anderson’s vivid memory of that Brier also was a game against Alberta.

“If I remember correctly, we had to play Alberta on the Tuesday night, and that was the first night they had to turn on the lights for colour TV,” he said. “But the time we got to the 11th and 12th ends, the ice was almost unplayable. I believe in the last end, only one rock made it to the house.”

Waite has been back to Kelowna since, but Anderson, who now lives in Markham, Ont., is making his first trip to the Okanagan since he was slinging the corn broom for New Brunswick at Memorial Arena.

“It’s perfect,” said Anderson. “I’ve known Jim for a long time, and being here with Mike and this team, is great fun.”

Both Waite and Anderson had plenty of fun watching on Tuesday morning as Canada — Mike Anderson is backed up by vice-skip Danielle Inglis, second Sean Harrison and lead Lauren Harrison — played its best game of the week to close within one victory of locking up a playoff berth.

Canada opened with three in the first end, and then proceeded to steal one in the second, three more in the third and one in the fourth.

New Zealand got one back in the fifth, but the Canadian team, representing the Thornhill, Ont., Curling Club, but the game away with two in the sixth end.

“That felt a lot like the nationals last year in Swan River (Man.),” said Anderson. “The ice was one game further along and we had a better feel for it. If that’s not as good as we can play, it’s pretty damn close.”

“We’re not taking anything for granted yet, but we like the position we’re in,” said Anderson. “Now it’s about trying to figure out how to get our game to where it needs to be for Friday and Saturday.”