KELOWNA, B.C. — Mixed curling can be tough on relationships, but Team Canada continues to buck that trend at the 2018 Winn Rentals World Mixed Curling Championship. 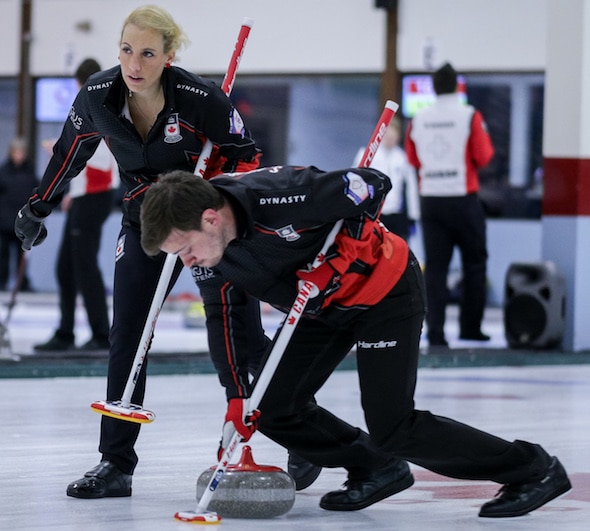 With vice-skip Danielle Inglis, the Canadian team — coached here by Jim Waite — has been together for eight years, an eternity by competitive mixed curling standards.

And this week in Kelowna, it’s even more memorable for the Harrisons.

“It’s definitely pretty special playing here with (Lauren); we’ve played mixed for quite a few years now, so we’re used to playing together, but not with the Maple Leafs on our back,” said Sean, moments after Canada’s 8-5 win over Hungary’s Zoltan Palancsa (3-3), which locked up a playoff spot for Team Canada. “A little added level of pressure, and we’re trying to stay cool out there.”

Lauren and Sean were married in June 2016; Inglis was a bridesmaid while Anderson was a groomsman, and that team unity has been a constant theme of its performance to date in Kelowna.

It’s particularly important for a lead and second to be on the same page as they sweep for the back end.

“It’s really nice,” said Lauren. “I feel like he’s my voice of reason. I can go to him and get information on my shots, and I feel really comfortable doing that. He’ll be really honest with me, and it’s nice to have that on the ice. And he’s right back to me with the same questions; it’s good communication, for sure.” 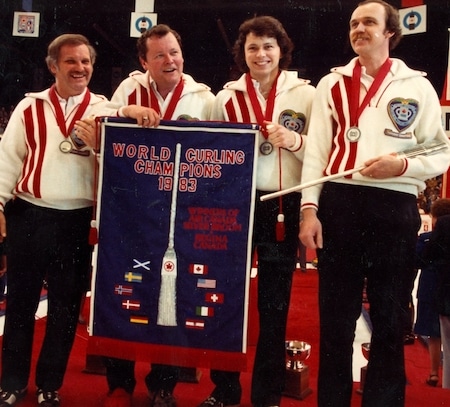 The Harrison name has some history on the world curling scene, of course. Sean’s dad Neil, who passed away in 2014, is one of the finest leads ever to play the game, and won the 1983 World Championship with Ed Werenich’s legendary team; he served as the alternate when Werenich won a second world title in 1990.

“It’s nice to be able to follow up in his footsteps,” said Sean, whose mom Jane is here cheering on the team, as is Werenich’s wife Linda.

There’s plenty of Neil Harrison memorabilia hanging around Sean and Lauren’s home, but now two more Canadian team jackets with “Harrison” on the back will be hung up.

“That,” said a smiling Sean, “will be pretty exciting.”

Canada improved to 5-1 with Wednesday’s win, which wasn’t secured until Anderson made an outturn draw to the button looking at two Hungarian counters.

“I didn’t have any doubts,” said Sean. “He’s had great draw weight the whole week. And he liked that path, too; he’d thrown it quite a few times. We just had to be prepared.

“I think we’re feeling good, throwing well. We just had one tight loss this week, so hopefully we can keep this rolling (into the playoffs).”

Canada will close out its round-robin schedule on Thursday at 8 a.m. PT against Slovakia’s Daniela Matulova (4-1).