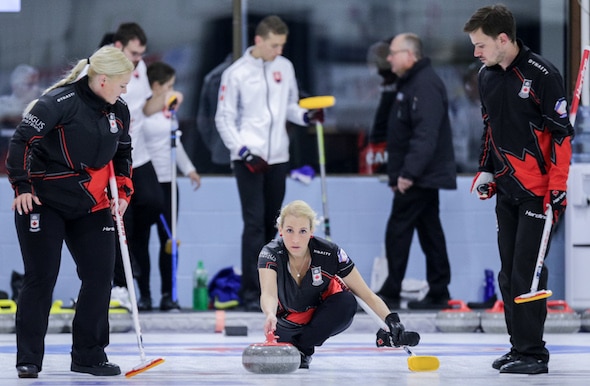 Anderson’s team from the Thornhill, Ont., Curling Club completed its round-robin schedule on Thursday morning with a 10-1 triumph over Slovakia’s Daniela Matulova (4-3) to lock up a spot in the 12-team playoffs, which begin on Friday afternoon at the Kelowna Curling Club.

Canada currently sits first in its eight-team pool with a 6-1 record, ahead of Norway’s Ingvild Skaga (5-1). Norway will complete its round robin later on Thursday against Hungary’s Zoltán Palancsa. If Norway wins, it will finish first by virtue of its round-robin win over Canada; if Hungary wins, Canada will finish first. 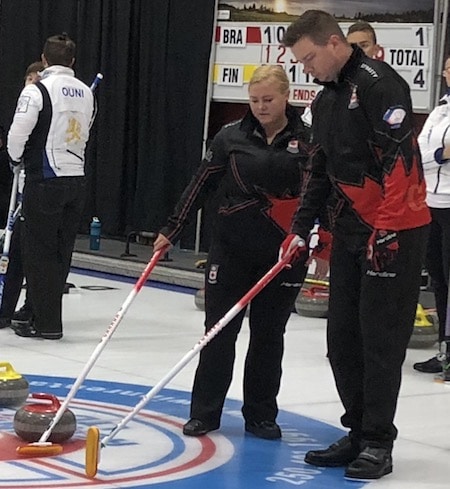 A first-place finish means a bye into the quarter-finals, which are set for Friday at 8 p.m. PT; if Canada finishes second, it will play in the qualification round Friday at 2 p.m. PT.

Either way, the Canadian team is thoroughly satisfied with its current position after its efficient dismantling of the Slovakian team, which needs Hungary to lose to Norway in order to reach the playoffs.

“It was perfect,” said Anderson of Thursday’s victory, which was completed with a steal of four in the sixth end. “We came out and played pretty much the way we played the other day (a just-as-dominating 10-1 win Tuesday against New Zealand). That’s the kind of feeling you want going into playoffs.”

The team was running on all cylinders against Slovakia — three in the first end, two in the fourth, a steal of one in the fifth and the game-ending four in the sixth. Lauren Harrison, in particular, was near perfect with her finest performance of the week, and it made things easy for Anderson.

“We had two rocks exactly where we wanted them in every end,” said Anderson. “She’s done that for the last three or four games. She’s probably the one who truly has gotten better every game, and that’s what we’re looking for. I think we’re where we need to be. In terms of how we’re throwing it, that was the best game we’ve had. Everybody is feeling good It’s been good to have to grind out a couple wins so that we know that we can do that, and we know we can come out and play like we just did.”

Now, Canada is back on level ground with the rest of the field going into the single-knockout playoffs, with no security blanket.

“That’s kind of how we’ve played the last four games,” said Anderson. “As soon as we dropped that game early to Norway (on the opening weekend), we knew we couldn’t take anything for granted. We’ve pretty much been in that mindset, and we’ll keep that mindset.”