KELOWNA, B.C. — Eight long years it took, but the payoff was oh-so-sweet on a beautiful Saturday afternoon in Kelowna. 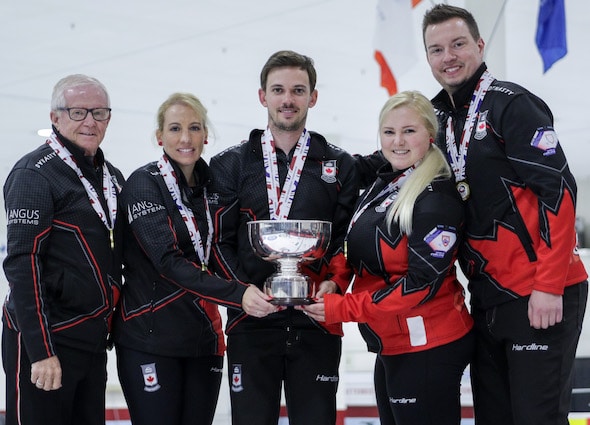 Mike Anderson and his Canadian mixed curling team from The Thornhill Club in Thornhill, Ont., have endured some painful losses over their eight seasons together, including some provincial finals.

World champs — even the words defied expectations for Lauren Harrison.

“Yeah, it feels weird to hear that,” she said, shaking her head in disbelief. “I’m still in shock.”

It was the first time Canada has captured gold at the World Mixed Championship.

“It’s crazy,” said an emotional Anderson. “I started playing with Sean when I was 14 or 15 and it’s really cool to win with him. And to do it in Canada … I guess we were a little disappointed when we found out we wouldn’t be going to Europe, but after this whole week, I would argue with anyone who says going abroad to play a world championship is more fun. The crowds here, to hear the hooting and hollering and stomping, it makes the game that much more fun.”

There were plenty of reasons for the pro-Canadian crowd to cheer on Saturday as Canada carried the momentum from its semifinal victory over Norway’s Ingvild Skaga earlier in the day into the final.

Canada scored two in the first end, one more in the second and it was simply a matter of time from then before the Anderson team could finally celebrate a world title.

“We kind of had that feeling yesterday morning (at the start of the playoffs) that we were in the exact same situation as we were when we won the nationals,” said Anderson. “You’ve got these games ahead of you; just put your head down and go. When you wake up with that feeling, it just makes everything a bit easier. The way we played this morning, coming into this game, it almost felt like a matter of time.”

After losing to Norway six days ago, Canada finished with four straight round-robin victories, and then added four more in the playoffs.

“The focus in every single game, every single end, was just to forget about who we’re playing. Just make the shot at hand,” said Lauren Harrison. “Focus on the broom and the weight. And the last few games, Mike played fantastic. The best thing about this team is that when somebody has a miss, we always found a way to make it up, and we know we can always count on Mike to make the last shot. He’s always going to do that for us.”

Both Anderson and Inglis had worn the Maple Leaf on a prior occasion, playing for Canada at the 2009 Winter Universiade in China; neither won gold, but neither lost faith that it would come at some point. Inglis, in fact, had made it a goal as a teenage curler

And they did it with as close-knit of a curling team as you’ll find anywhere in Canada, at any level.

“It is pretty special,” said Inglis. “We did a lot of losing before we did a lot of winning, and seeing it all cumulate in this is beyond special.”

With the victory, Canada moves from fourth to first in the overall World Mixed Curling Rankings, based on four years’ worth of results.

In the bronze-medal game, Russia’s Alexander Eremin stole one in the eighth end for a wild 8-7 win over Norway.