And, suggested Anderson, some of the pressure that accompanies wearing the Maple Leaf at a world championship is now off with a berth in the final four.

“We talked about it before the game — there’s a difference between trying to win Canada and trying to represent Canada,” said Anderson. “This is where we feel Canada probably should be, and where the world probably thinks Canada should be, and it’s a bit of a monkey off our back to get there.”

But that monkey wasn’t shrugged off easily against the young Scottish team coached by Toronto’s Sean Turriff.

The Scots’ nerves showed early as Canada took an early lead by stealing single points in the first three ends, and forcing Scotland to one in the fourth.

“That was the best stretch of four ends that we’ve played all week,” said Anderson. “They (his teammates) gave me a chance; it was one of those things where you just look at the broom and you know you’ve made it the moment you let it go. It’s a really good feeling.”

But Scotland, which won the world title last year in Champéry, Switzerland, by beating Canada (both countries had different lineups last year), hung tough. The Scots forced Canada to one in the fifth and seventh ends, and scored deuces in the sixth and eighth ends to force the extra.

In the ninth, Brydone put his last rock-draw on the button behind a centre guard, but Anderson made a precise angle-raise takeout to remove the Scottish counter and score three for the victory.

“What we’ve seen with the five-rock (free guard zone) rule so far this week, it’s so easy to spin a deuce (when you’re behind),” said Anderson. “You can’t afford to take your foot off the gas pedal, and sometimes that’s what happens.”

Norway advanced to the semifinal with a 6-4 win over Switzerland’s Mario Freiberger.

Norway defeated Canada 5-4 in their round-robin game last Sunday, thanks to a first-end count of three. 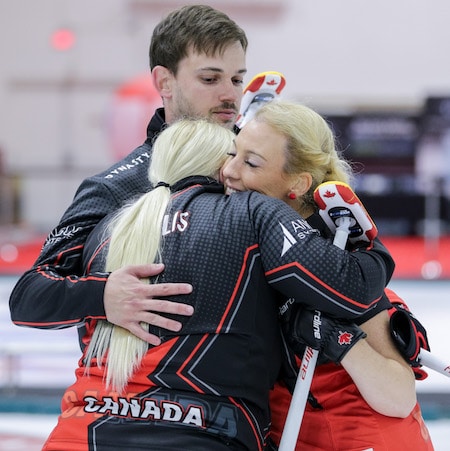 “We owe them one,” said Anderson with a smile. “Just come out strong and see what we can do.”

The gold- and bronze-medal games are scheduled for 3 p.m. PT on Saturday.