Local favourites off to strong start at Canadian Beef Masters

Last week the stars of Canadian curling were all over the map. This week, they’re all in the same Nova Scotia town. 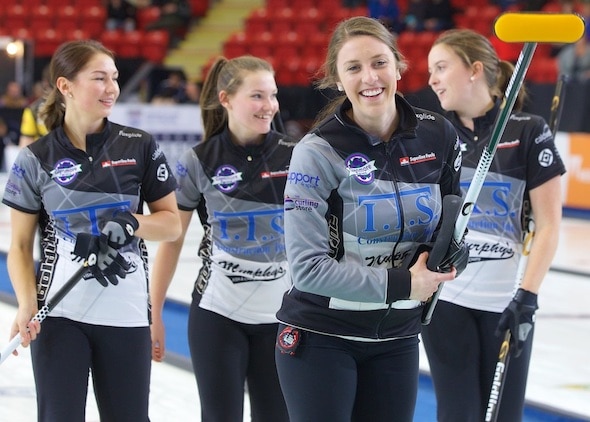 Kaitlyn Jones and her young Nova Scotia team are off to a strong start in Truro, N.S. (Photo, courtesy Sportsnet/Anil Mungal)

The Canadian Beef Masters of Curling is underway in Truro, N.S., and 30 of the top men’s and women’s teams (15 in each gender) are there to take part, battling over their share of each gender’s $125,000 purse.

On the men’s side, Calgary’s Kevin Koe is the only undefeated Canadian team remaining, currently sitting at 3-0. Toronto’s John Epping has also won three, but dropped a game to Scotland’s Ross Patterson early in the event. The top eight teams will move on to the playoffs in the three-pool event.

Fresh off a flight from China, Winnipeg’s Jennifer Jones showed no signs of jetlag, winning her first three games in the round robin. Casey Scheidegger (Lethbridge, Alta.) also won three out of the gates, as did Ottawa’s Rachel Homan.

Homan lost her fourth game to local heroes Team Kaitlyn Jones. The reigning world junior champions were invited to participate in the event under a sponsor’s exemption, and the Halifax foursome didn’t waste the opportunity, garnering a 3-1 record through its first four games. That will qualify them for the playoffs in only their second Grand Slam of Curling event.

Pool play will finish Friday night, and playoffs will begin on Saturday. TV coverage is available on Rogers Sportsnet channels.

Elsewhere on the World Curling Tour, the Huron ReproGraphics Oil Heritage Classic is underway in Sarnia, Ont., featuring a 24-team field, and a purse of $19,000. Notable names in the bonspiel include last week’s WCT winner in Gatineau, Que., Scott McDonald of Kingston, Ont., and former U.S. champion Heath McCormick.

In Kamloops , B.C., the HUB International Crown of Curling features 16 men’s and 10 women’s teams. The men are battling over $16,000 and the women’s purse is $10,000. Jim Cotter (Vernon, B.C.) is in the field, playing with a longtime foe from Saskatchewan, Steve Laycock.

For scores and updates for all events, visit CurlingZone.com.