For teams playing out of the Territories, the prospect of being elite level curlers on the World Curling Tour can seem daunting. Each competition is a flight (or multiple flights), and a day of travel away. Those flights aren’t cheap, and neither are hotels, meals, and entry fees. The conundrum is made worse when you lose out of the event without any winnings to cover any of the costs. 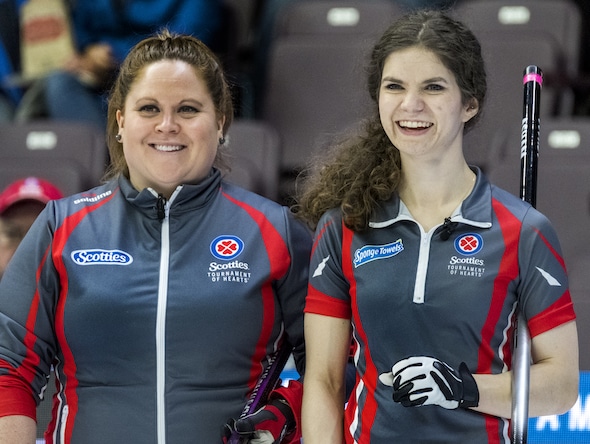 Kerry Galusha, left, and vice-skip Sarah Koltun were all smiles after their win in Kemptville, Ont., on the weekend. (Photo, Curling Canada/Andrew Klaver)

Such had been the case for Yellowknife’s Kerry Galusha for years and years. She’d play in a few events at great expense of time and money, and rarely come home with anything to show for it. It was getting a bit frustrating.

“We knew we needed to change things if we wanted to do well,” said Galusha. “That meant putting in more time and money to travel more. We worked hard in the off season on obtaining extra sponsorship and we managed to snag a lot of points tickets for travel so that has helped us out a lot. It was mainly asking for the extra time off work. That has been a bit tougher, but we have all managed to figure out that side of things.”

The extra effort paid off this past weekend, as the Galusha team — with Sarah Koltun, Brittany Tran and Shona Barbour — not only qualified for their third event championship round of the season, but went on to win the Royal LaPage Women’s Fall Classic in Kemptville, Ont.

The championship victory over Halifax’s Mary-Anne Arsenault earned Galusha $6,000 and 32.665 points on the Canadian Team Ranking System. Already, Galusha’s foursome has earned $8,350 this season, thousands more than any previous year.

“This is, by far, the best season to date as we qualified in our first two spiels this season, and then managed to pull this one out,” said Galusha. “It feels amazing as it was such a grind. Our team is trying to play more to get better and it already seems to be paying off.”

“We have been working on a few new things with our coach John (Epping) and it seems to be working so far, but we still have lots to work on.”

With the added effort, sponsorship, and winnings come more events.

“We have Edmonton this weekend, and then Red Deer next weekend. So that puts us at five WCT events. We will then do another local spiel here in Yellowknife so that’s six weekends of curling plus all our playdowns, etc., which is more curling than we have ever done before,” said Galusha.

“Our end goal is doing well at the Scotties so we are building for that.”

In Mixed Doubles action, Boston’s Monica Walker and Alex Leichter defeated Winnipeg’s Shannon Birchard and Catlin Schneider of Regina in the final of the Madtown Doubledown presented by Leinenkugel’s in Madison, Wisconsin. Top prize was $8,500 CDN while the runners-up took home $5,900.