There’s only two draws left in the round robin at the 2019 Canadian Mixed Curling Championships at the Fort Rouge Curling Club in Winnipeg. While some teams know they’ll qualify for the Championship Pool and have the opportunity to play for gold this Saturday, others are jostling for position. Each win, especially this late in the round robin, has extra value with the top four teams in each pool qualifying for the Championship Pool. 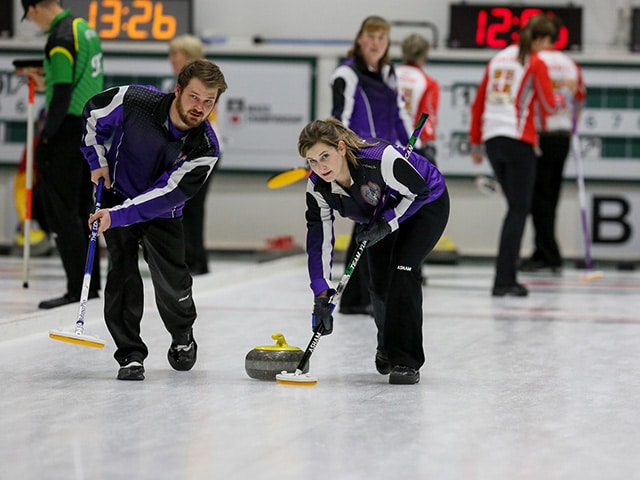 Alexx Peech, Jenna Duncan and their Yukon team from the Whitehorse Curling Club had two big wins against Northern Ontario and Saskatchewan. The team is trending towards a spot in the Championship Pool. (Curling Canada)

Here’s a recap of the last two draws and how the results impact the Championship Pool standings:

Nova Scotia’s Kendal Thompson (Mayflower Curling Club) claimed a win against New Brunswick’s Chris Jeffrey (Gage Golf and Curling Association, Oromocto). Nova Scotia played an efficient game without the hammer, limiting New Brunswick to single points for most of the game. While New Brunswick did get a score of two in the seventh end, it couldn’t overcome Nova Scotia in the 7-5 game. Nova Scotia is in great position with a 4-1 record with a challenging game against Alberta’s Kurt Balderston (Grande Prairie Curling Club) Wednesday night. New Brunswick will attempt to stay relevant in the race for a Championship Pool spot, but will first need to defeat the undefeated Ontario team on Wednesday afternoon.

Yukon’s Bob Smallwood (Whitehorse Curling Club) scored big against Trevor Bonot of Northern Ontario (Port Arthur Curling Club, Thunder Bay) in a 10-6 result. Yukon opened the game with a steal of three. Despite giving up two the next end, Yukon added another four for a 7-2 lead after three ends of play. The teams exchanged points throughout the second half of the game, but Northern Ontario was unable to overcome the early-game deficit. This was a critical game because both teams now have 3-2 records with one more game to play.

Ontario’s Wayne Tuck (Ilderton Curling Club) remained the lone undefeated team at the 2019 Canadian Mixed Curling Championship after defeating British Columbia’s Cody Tanaka (Richmond Curling Club) 9-2. The teams traded singles in the first two ends of play, but Ontario’s score of two followed by a steal of two in the fourth end gave it a cushioned lead. British Columbia was forced to one in the fifth and Ontario made a draw for four on its last, leading to handshakes. Ontario is looking down at other teams in Pool B with a 5-0 record, while British Columbia drops to 2-3. British Columbia has one more game in the round robin against Prince Edward Island and will need to win to qualify.

Quebec’s Félix Asselin (Glenmore, Laval-sur-le-Lac and Baie d’Urfé Curling Clubs) and Saskatchewan’s Jason Ackerman (Highland Curling Club, Regina) played an exciting game. The teams started with a bang, exchanging scores of three in the first and second ends. Down by two in the final end, Ackerman made a hit for two to force the extra end. But Asselin landed a highlight-reel double-raise takeout for two in the extra for a 10-8 victory. The win puts Quebec alone at the top of Pool A, with four teams at 3-2 battling for the final three spots in the Championship Pool.

Yukon levelled its record at 2-2 with an emboldened win against the then-undefeated Saskatchewan team. Smallwood left Saskatchewan in the rear-view mirror in the third end with a draw for three and 5-3 lead. Yukon added steals of two in each the fifth and sixth ends which led to a 9-3 win. Saskatchewan was the only remaining undefeated team in Pool A, but dropped to a 3-1 record.

Manitoba’s Colin Kurz (Assiniboine Memorial Curling Club, Winnipeg) strung together its first back-to-back victories of the championship on Tuesday night. Manitoba bested Nunavut’s Ed MacDonald (Iqaluit Curling Club) 9-1 on Tuesday evening. Kurz blanked the first and set up a score of two in the second. Manitoba boosted the lead with steals of two in the third and one in the fourth before Nunavut claimed its first point of the game. But Manitoba continued pressing and scored four in the sixth, forcing Nunavut to concede. Manitoba has one more game against Newfoundland and Labrador and can secure a spot in the Championship Pool with a win.

The game between Tanaka of British Columbia and New Brunswick’s Jeffrey came down to the last rock. British Columbia trailed 4-3 in the back-and-forth game but possessed the hammer in the final end. New Brunswick was lying one with a British Columbia stone off in the wing. Jeffrey’s final guard over-curled just a touch, which allowed Tanaka to play a takeout for two and take the 5-4 win. That win left both teams with 2-2 records.

Teams will complete their round robin schedules on Wednesday over the next two draws at 2 p.m. (all times CST) and 6 p.m.

The top four teams in each pool advance to the Championship Pool. Teams will play the teams from the opposite pool, carrying forward their full win-loss records. Meanwhile, the bottom three teams in each pool will go to the Seeding Pool, where they will compete against the three teams from the opposite pool. These teams also carry forward their full win-loss records.