Qualifying for the Championship Pool is the first step along the road to pursuing a championship final. But that road varies depending on how a team qualifies. A top-place finish provides a bit of cushion en route to the gold medal game, but teams that just clear the hurdle are a usually two – sometimes three – games behind the eight-ball with little room for error. Such is the case for British Columbia’s Cody Tanaka at the 2019 Canadian Mixed Curling Championship and it’s why his first Championship Pool victory is a step in the right direction. 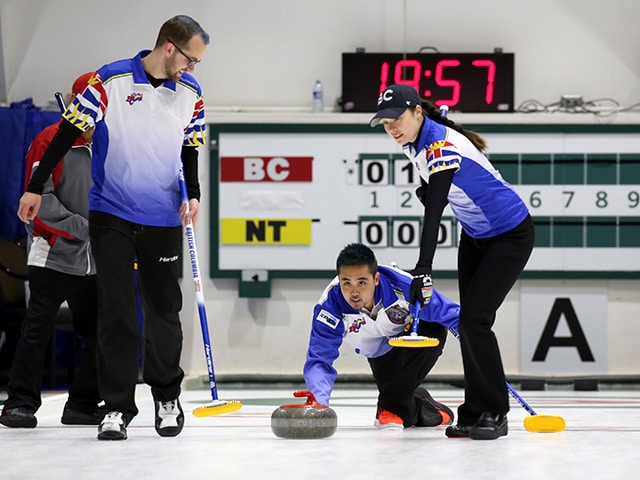 Tanaka, from the Richmond Curling Club, defeated Quebec’s Félix Asselin (Glenmore, Laval-sur-le-Lac and Baie d’Urfé Curling Clubs) 6-4 in the opening round of the Championship Pool at the Fort Rouge Curling Club in Winnipeg. The win lifts British Columbia’s record to 4-3, while Quebec, the top team in the opposite pool, drops to 5-2.

After blanking the first, Tanaka took advantage of Asselin’s final shot, a missed hit-and-roll to lie one.

“That spot was really curling when you got it over the centre line. It just over-curled and we got a lucky break,” said Tanaka.

The 24-year-old skip played a double to lie three and take a 3-0 lead. Neither team could take advantage of the hammer over the next four ends, exchanging singles until the seventh. Quebec scored two to trail by one, but British Columbia maintained control in the last end with the hammer. Asselin played a freeze on a British Columbia stone on the button and Tanaka opted to play a peel that eliminated both rocks, the shooter plus another rock behind the tee line. This left one British Columbia stone in play which Asselin attempted to draw behind. The shot remained open and Tanaka removed it to secure the win. He hopes there will be more.

“We knew going into the championship round that we’re probably going to have to win every game to have a chance to make the playoffs, so getting a win against a great team like Quebec really gets our confidence going,” Tanaka said after the game.

Tanaka, third Shawna Jensen, second Travis Cameron and lead Catera Park are all good friends off the ice, which allows them to communicate efficiently throughout the week at the 2019 Canadian Mixed Curling Championship.

“We started off with two losses, but they were close games. We just knew we had to execute more. We talked and worked out some things as we needed to communicate more. That’s what we’ve been doing since and they’ve been paying really well,”  he said of his team. “That’s made things easier on me.”

His teammates have played well and helped the skip secure back-to-back wins, but the path forward is no cakewalk. They take on Manitoba on Thursday evening, followed by Saskatchewan and Yukon on Friday.

In other Championship Pool action, Alberta’s Kurt Balderston (Grande Prairie Curling Club) bested Manitoba’s Colin Kurz (Assiniboine Memorial Curling Club, Winnipeg) 5-3. The Albertan team had a key three-end run where it stole two points in the fourth, one in the fifth and one in the sixth. Alberta has a 5-2 record and Manitoba drops to 4-3.

Ontario’s Wayne Tuck (Ilderton Curling Club) improved to 7-0 with a win against Bob Smallwood from the Whitehorse Curling Club in Yukon. Ontario put two scores of two on the scoreboard while limiting Yukon to single points throughout the game for a 6-4 win.

Nova Scotia now has five wins in a row. Kendal Thompson from the Mayflower Curling Club defeated Saskatchewan’s Jason Ackerman (Highland Curling Club, Regina) in convincing 8-3 fashion. Nova Scotia maintains pace in the pool with a 6-1 record while Saskatchewan drops into the logjam with three other 4-3 teams.

New Brunswick’s Chris Jeffrey won both of his games in the Seeding Pool on Thursday. New Brunswick defeated Nunavut 15-1, followed by a 9-5 win against Northern Ontario. Nunavut’s Ed MacDonald (Iqaluit Curling Club) did not fare any better in the second draw of the day. He lost to Prince Edward Island 12-3. While Prince Edward Island’s Melissa Morrow (Summerside/Charlottetown Curling Clubs) won that game, she did succumb to Newfoundland and Labrador’s Harold Walters (RE/MAX Centre, St. John’s) 8-5 earlier during the previous draw. Mel Sittichinli of the Northwest Territories (Inuvik Curling Club) earned his first win of the championship against Walters after making a stellar runback in the final end. He stole a point to win 4-3. He also had a close game in the morning, losing 9-6 to Northern Ontario’s Trevor Bonot (Port Arthur Curling Club, Thunder Bay).