ESTEVAN, Sask. — Alli Flaxey’s team was the last women’s entry into the 2018 Home Hardware Canada Cup, but it didn’t take long for the Winnipeg squad to pick up its first victory. 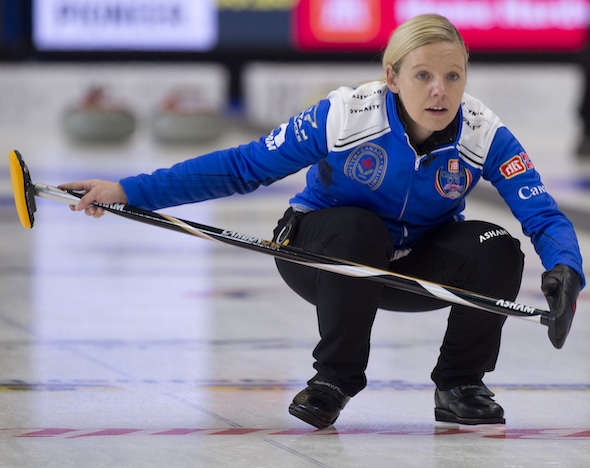 Alli Flaxey’s Winnipeg team got off to a winning start on Wednesday morning in Estevan, Sask. (Photo, Curling Canada/Michael Burns)

Playing in the opening draw Wednesday morning at Affinity Place, Team Flaxey scored deuces in the third and sixth ends, and added a crucial steal of one in the fourth en route to a 6-5 victory over Edmonton’s Laura Walker.

Flaxey, backed up by vice-skip Kate Cameron, second Taylor McDonald, lead Raunora Westcott and coach (and husband) Caleb Flaxey, was the last qualifier for the eight-team women’s field as the leader in the Canadian Team Ranking System women’s standings as of Nov. 11.

But even considering its solid start to the 2018-19 season, the first-year lineup didn’t arrive in Estevan overly confident.

“We came in here not having a ton of expectations,” admitted Flaxey. “We just really wanted to use this as a gauge of where we’re at, so to get that first win under our belts early is awesome.

“It’s interesting to see where you stack up against the best in Canada; we did have to fight and claw our way into this. We know what we’re capable of, but it’s just about getting out there, playing loose and it worked for us.”

It certainly did, although like the other nine teams on the ice Wednesday morning, Team Flaxey had to learn about the ice on the fly. The massive power failure in Saskatchewan on Tuesday resulted in a delay in the ice preparation at Affinity Place and the cancellation of Tuesday night’s team practices. Ice technicians Jamie Bourassa and Greg Ewasko worked through the night to get the ice ready for the opening draw, and teams were granted an extra 10 minutes of pre-game practice.

Flaxey skipped a different lineup at the Tim Hortons Roar of the Rings 12 months ago in Ottawa, and with the formation of the new team over the summer, her focus turned to getting to know her teammates — both as people and throwers of the rock. 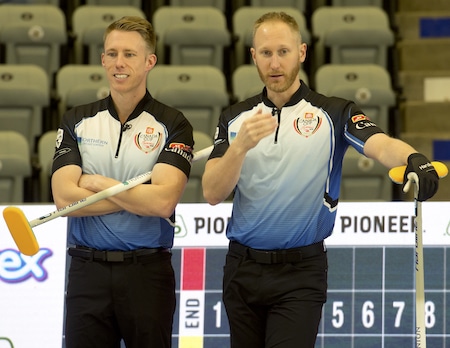 “I’ve learned a lot over the last few months,” said Flaxey with a smile. “I spent a lot of time in Winnipeg, and on airplanes going back and forth to spend weekends with them and to learn how they throw. It’s getting better with every week that we’re together, and we’re finding new things to work on in every practice.”

In the other women’s game on Wednesday morning, Winnipeg’s Darcy Robertson scored two in the first end and three more in the third and cruised to an 11-6 win over Calgary’s Chelsea Carey.

In men’s action, Brad Jacobs of Sault Ste. Marie, Ont., scored two in the seventh end and three in the ninth in a 9-5 victory over Calgary’s Kevin Koe; Toronto’s John Epping turned back Edmonton’s Brendan Bottcher 7-5; and Brad Gushue of St. John’s stole single points in the ninth and 10th ends in a 7-4 win over Regina’s Matt Dunstone.