ESTEVAN, Sask. — It was a shot that would test any elite team — never mind one that featured a vice-skip playing just his third game with his new team. 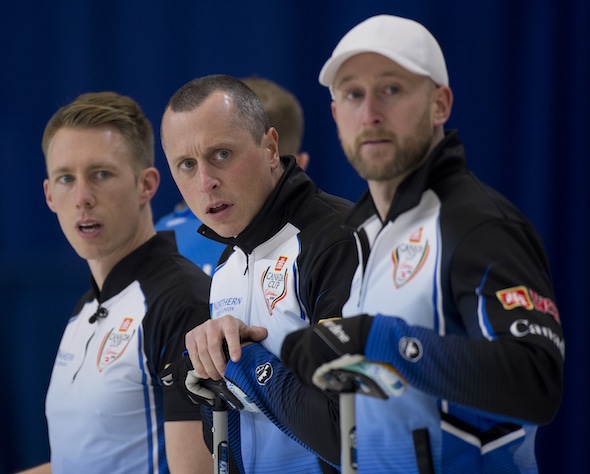 It all came together in the 10th end Thursday morning at Affinity Place as Team Jacobs (3-0; Sault Ste. Marie, Ont.) pulled out a dramatic 5-4 over Reid Carruthers’ Winnipeg team (0-3) that is being skipped this week by Mike McEwen.

Jacobs, facing three Team Carruthers counters, made a wide outturn tap of a Carruthers stone partially buried in the four-foot for the victory, thanks to the efforts of all four players, including Kennedy in just his third game in the lineup in place of Ryan Fry, who’s taking some time away from curling.

“It was really great; just an exciting team shot, and really happy to be 3-and-0,” said Jacobs, who set the stage for his game-winner with a crucial runback on his first shot that cleared a congested button. “(Kennedy) really did his job; he got E.J. and Ryan on it at the right time; he couldn’t have called it any better, and he was a big reason why we made it.”

Team Homan had some enthusiastic fans in the building on Thursday morning. (Photo, Curling Canada/Michael Burns)

About the only thing missing from Kennedy was the fist-pumping celebration that is the trademark of Team Jacobs; the other three did their part, but the smiling Kennedy merely observed.

Based on the performance to date in Estevan, there’s a good chance. Team Jacobs can clinch no worse than a tiebreaker berth with a win later Thursday.

“I knew I’d have to practise my fist pumps (when he was asked to play with the team),” said Kennedy with a grin. “Hopefully there’ll be a time and place for it; maybe we’ll save it for a bigger game.”

Half a week into his first experience as a member of Team Jacobs, Kennedy hasn’t discovered anything new about the team’s quite obvious on-ice skill-set; that’s been evident to him for years as rivals. But being on the inside has given him a new appreciation of what has made the team so successful over the years.

“You get into that inner circle and you see what makes guys tick, what gets them up, why they play, their love for the sport, their values, their morals, their ethics,” said Kennedy. “I’ve been beyond impressed with what I’ve seen, and a lot in common with them, to be honest — more so than I ever thought. I think we’ve meshed together pretty well.”

In the other men’s game on Thursday morning, Brad Gushue (2-1; St. John’s) scored five in the fourth end en route to a 7-2 victory over Toronto’s John Epping (2-1).