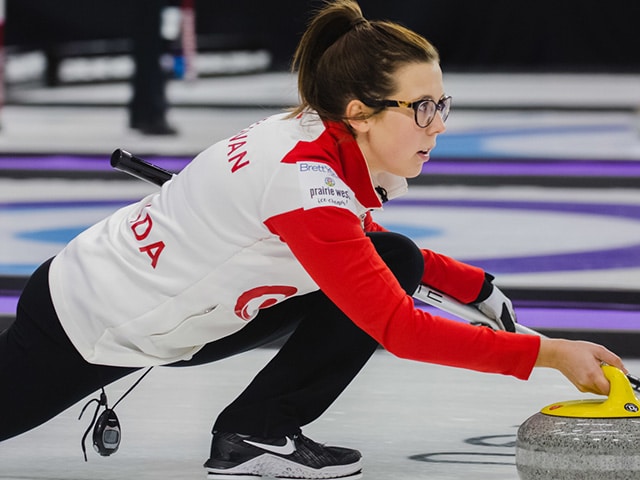 “A couple of really great games for us, some tight ones that we were able to pull off in the end. We feel like we’re starting to make some more shots and get a handle on the ice, so I feel like we have some momentum now,” Fleury said.

Fleury, third Selena Njegovan, second Liz Fyfe, lead Kristin MacCuish and coach Andrea Ronnebeck began Friday with an all-important 7-5 victory against Jamie Sinclair of the United States. Canada gained ground with a score of three in the third, but the United States clawed away at the lead. Sinclair scored one in the fourth and stole one and two points in the fifth and sixth ends respectively. But Canada regained the lead in the seventh and cemented the victory in the eighth. Fleury was trying to force the U.S. to one point and a shootout but Sinclair’s final hit rolled out of the house, giving up a steal of one.

“We came out strong and put a lot of pressure on them early and kind of let it slip away from us in the middle of the game, but pulled it off in the end,” Fleury said. “Most of the [last end] it was looking that way [going to be a shootout], that they were going to get one,” Fleury said. “We were preparing for that shootout, talking about the paths and the draw weight – but it didn’t go that way.”

Canada is tied with South Korea’s Minji Kim for first-place in the pool. Those teams will play on Saturday morning and Canada closes the double round-robin with a rematch against the United States in the evening. The first place team will qualify for the final on Sunday.

In other action, Winnipeg’s Jason Gunnlaugson had back-to-back losses that have put his chances of appearing in the final in jeopardy. His first was a 5-3 loss on Thursday night against 2018 Olympic gold-medallist John Shuster.

On Friday, Gunnlaugson only had one game but it was unfortunately a deja vu experience. Gunnlaugson took on Scotland’s Bruce Mouat (2-2) on Friday afternoon and – just like their first game on Wednesday – Gunnlaugson saw an early game lead slip away with a big sixth end score, leading to a 7-5 Scottish victory.

Gunnlaugson, vice-skip Alex Forrest, second Denni Neufeld, lead Connor Njegovan and coach Chris Neufeld doubled Scotland 4-2 at the fourth-end break, but a Scottish three-ender in the sixth put Scotland back in control. In the previous meeting, Scotland scored four in the sixth en route to victory. On Friday, Mouat maintained control for the remainder of the game, stealing in the seventh end and making a solid freeze in the eighth for another steal.

“It was a really, really good game. We basically played a great game other than one end kind of thing – gave up a three. Then we got down to the wire and had a good chance to win and unfortunately he made the perfect shot and we almost made the perfect shot to counter him,” Gunnlaugson said.

The Canadian men are now at the bottom of their group with a 1-3 record. They’ll close out the double round-robin on Saturday against Zou Qiang of China (2-2) and John Shuster of the United States (3-1).

“We’re doing a lot of the right things, we just need a little bit better execution. We’ve had control in now three of the four games we’ve played. We just have to finish the games a little stronger,” Gunnlaugson said.

But the Canadian men’s team wasn’t the only one to falter on Friday. Kalynn Park (Calgary)/John Morris (Canmore, Alta.) lost both of their games in the mixed doubles competition. The Canadian duo went tit for tat with Switzerland’s Jenny Perret/Martin Rios (4-0) for the first half of the morning draw, but Switzerland broke the game open in the second half. First, Switzerland scored two in the fifth end followed by three in the sixth on its way to a 7-4 win.

The second game of the day was also a challenge for the Canadian team. Park and Morris were behind the 8-ball from the start against Sweden’s Malin Wendel/Fabian Wingfors (1-4). Sweden scored three in the opening end and tacked on another four in the third for an early 7-2 lead. Canada scored a pair in the fourth end but only managed to exchange single points in the second half of the game in the 9-6 loss.

The Canadian mixed doubles team is now at 1-4 in its group and will close the Curling World Cup with a game on Saturday against South Korea’s Hyeri Jang and Chiwon Choi (3-1).

There are eight teams competing in each of the men’s, women’s and mixed doubles competitions. All teams play a double round-robin until Saturday. The top teams in each group move into the finals on Sunday. In addition to prize money, the winning teams will earn a berth to the Curling World Cup Grand Final, occurring in Beijing from May 8-12, 2019.