ESTEVAN, Sask. – In the end it was typical Brad Jacobs: make the big shot on final stone for a come-from-behind victory. And in this case one that clinched first place in the round-robin and moved his Sault Ste. Marie, Ont., team right into Sunday’s final of the 2018 Home Hardware Canada Cup. Jacobs executed a perfect in-off double takeout to score two in the 10th end to nip John Epping of Toronto (2-3) 7-6 to remain unbeaten at 5-0. “There was no other option,” Jacobs said of his final stone that settled the tightly fought battle. Third Marc Kennedy said he was “a little surprised we had a shot for two the way that end went. “But we did, and he made it. Great shot, great shot. Things are working out for us this week, so we’ll take it. No one would have expected 5-0 and a bye to the final already.” Epping, who suffered a third straight loss, gave his Ontario rival everything the Jacobs team, which includes brothers E.J. and Ryan Harnden at second and lead, could handle. “It was our first real test of adversity, emotionally and as a team, and I think we grinded it out and handled it really well,” said Kennedy, who is filling in for Ryan Fry. Jacobs agreed the week has been a difficult grind physically and emotionally, and after Friday’s nerve-wracking win he’s looking forward to a final round-robin game in the evening draw. “We’re going to go out and have as much fun as possible.” 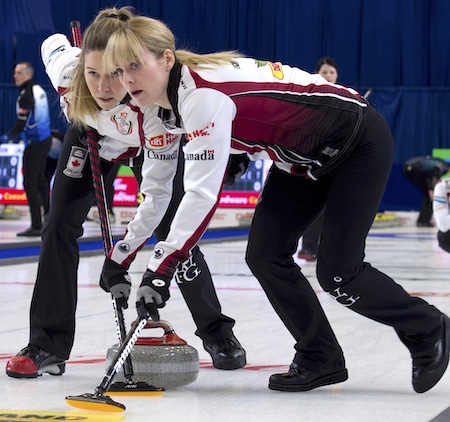 In the other men’s game, reigning Tim Hortons Brier champion Brad Gushue of St. John’s (3-2) beat Reid Carruthers of Winnipeg (0-6) 8-4 to keep alive his playoff hopes. On the women’s side, Manitoba skips Kerri Einarson (Gimli) and Jennifer Jones (Winnipeg) led their teams to wins to remain tied atop the standings at 5-1. Einarson beat Laura Walker of Edmonton (1-4) 8-5 and Jones scored four in the ninth end to beat Casey Scheidegger of Lethbridge, Alta., (3-3) 9-6. In the other women’s game, Rachel Homan of Ottawa (4-2) beat Chelsea Carey of Calgary (2-3) 9-2. The men’s round-robin wraps up this evening while the women will play their final draw Saturday morning to determine playoff teams and positioning.