ESTEVAN, Sask. — It has been a magical and, yes, surprising start to the 2018-19 curling season for Kerri Einarson’s new team.

And while the concept of four skips combining to form one team may buck conventional wisdom, the evidence presented to date by Einarson and her team based in Gimli, Man. — vice-skip Val Sweeting, second Shannon Birchard, lead Briane Meilleur and coach Patti Wuthrich — is compelling.

The latest example has been Team Einarson’s performance at the 2018 Home Hardware Canada Cup, which sees the team headed to Sunday’s 2 p.m. (all times Central) women’s final thanks to its first-place finish in the round robin.

Team Einarson nailed down top spot on Saturday morning at Affinity Place with a 7-3 win over Calgary’s Chelsea Carey (2-5).

“This game was pretty big for us,” said Einarson, whose team has won four World Curling Tour events this season and leads all Canadian teams with a 48-13 win-loss record this season, including a 6-1 record in Estevan. “It’s nice to have that time off. We need that rest. It’s a long week, that’s for sure.”

Team Einarson will take on the winner of Saturday’s 7 p.m. semifinal between Winnipeg’s Jennifer Jones (5-2) and Ottawa’s Rachel Homan (5-2) — the two most recent champions of the Home Hardware Canada Cup (Jones in 2016, Homan in 2015). 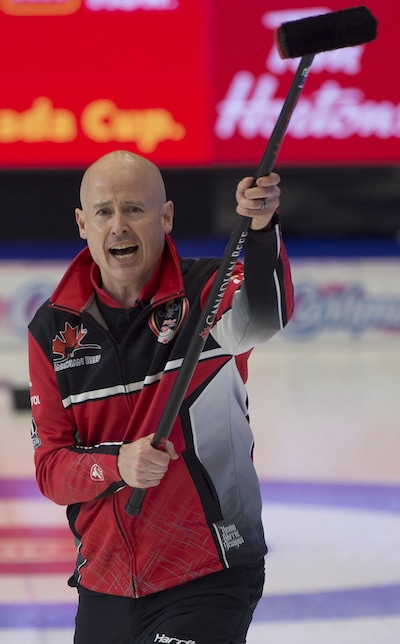 Einarson’s explanation for the early success?

“Everything has just seemed to click for us,” she said. “Our personalities are all pretty close to the same, and we all get along really great. We definitely didn’t expect this much success; we knew there would be some challenges along the way. We’re still learning in every game.”

Meanwhile, the men’s playoff picture was cleared up on Saturday morning with Calgary’s Kevin Koe beating Edmonton’s Brendan Bottcher 8-7 in a third-place tiebreaker after both teams finished the round robin with 4-2 records.

Koe made a wonderful in-off to score a stunning deuce in the 10th end to advance to Saturday’s 2 p.m. semifinal against two-time defending Tim Hortons Brier champ Brad Gushue of St. John’s.

“I was just hoping to have a shot,” said Koe of the game-winner. “Obviously you’re not going to make that too often, but right time, right place.

“We’ll have to play a little better against Brad (Gushue); he seems to be playing well but we’re just happy to be in the playoffs.”