Canadian teams outside the playoff picture at Curling World Cup

It wasn’t the result the three Canadian curling teams hoped for when arriving at Omaha, Neb., for the Curling World Cup. The Canadian men’s, women’s and mixed doubles teams did not qualify for any of the Sunday finals at Ralston Arena. Despite the result, Canadian teams gained some new experience playing at the new event. 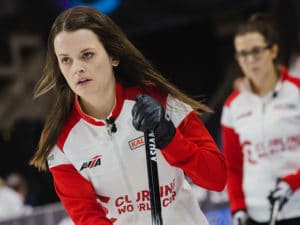 Tracy Fleury and her team from Winnipeg finished the Curling World Cup with a 4-2 record. (Photo, World Curling Federation/Céline Stucki)

Tracy Fleury and her Winnipeg-based squad had a chance of making the final when the action started on Saturday; first was a must-win game against South Korea’s Minji Kim. But, just like when the teams played earlier in the week, Canada came out on the losing side. After blanking the first two ends, South Korea put up scores of two and one in the third and fourth ends. While Fleury, vice-skip Selena Njegovan, second Liz Fyfe, lead Kristin MacCuish and coach Andrea Ronnebeck scored one in the fifth, South Korea negated it with a single of its own in the sixth. Canada put up a crooked number – a two – in the seventh, but couldn’t overcome South Korea once again in the 5-3 loss.

In the final game of the night, Canada won its fourth game game of the week against Jamie Sinclair’s American squad. Fleury scored one point followed by a steal of two in the second for a 3-0 lead and never looked back in the 7-4 win. This win launched the Canadian women to a 4-2 record overall. However, since South Korea had the same record and won both games against Canada, it received the spot in Sunday’s women’s final.

“We learned a lot this week and it’s always great to play against a strong international field and get that experience. We love representing Canada; a little disappointed to not be playing tomorrow (in the final) but we’re overall happy with our performance this week,” Fleury said.

In men’s action, Winnipeg’s Jason Gunnlaugson started Saturday with a 10-6 loss against China’s Zou Qiang. China scored two in the first and one in the second for an early three-point lead. But Gunnlaugson, vice-skip Alex Forrest, second Denni Neufeld, lead Connor Njegovan and coach Chris Neufeld came back with a three-ender in the third. But that wasn’t the only three-point score of the game, as China added scores of three in the fifth and seventh ends, while Canada had another three-ender in the sixth. When the dust settled, it was China coming away with a 10-6 victory to split the two-game series between the teams.

Canada had one more game against John Shuster of the U.S.A. in the afternoon draw, but a rough middle-stretch led to a 7-3 Canada loss in six ends. After scoring single points in the first two ends, Gunnlaugson gave up a four-ender followed by steals of one in the fourth and two in the fifth.

The two losses dropped Canada to 1-5 at the event, while Shuster (5-1) clinched first in the pool and the chance to play a 2018 Olympic gold-medal game rematch in Sunday’s final against Niklas Edin (5-1). 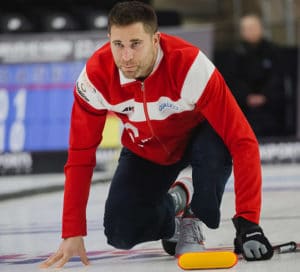 In mixed doubles action, Kalynn Park (Calgary) and John Morris (Canmore, Alta.) ended their week on a good note against South Korea’s Hyeri Jang and Chiwon Choi; the pair finished the Curling World Cup strong with an 8-6 win. Park and Morris opened with a score of four in the first end, but South Korea surged over the next five ends, scoring five points and only giving up one. With the game tied, Canada scored three in the seventh and held South Korea to one in the final end for a 8-6 win.

Canada finished the round robin at 2-4, while South Korea dropped to 3-3. 2018 Olympic mixed doubles silver-medallists Jenny Perret and Martin Rios of Switzerland (6-0) clinched the spot in Sunday’s final against Norway’s Kristin Skaslien/Magnus Nedregotten (4-2).

The top two teams in each pool qualified for Sunday’s finals with the winners earning a cash prize and an invitation to the Curling World Cup Grand Final, occurring in Beijing from May 8-12, 2019. Three Canadian teams – Kevin Koe (Calgary), Rachel Homan (Ottawa) and Laura Walker (Edmonton)/Kirk Muyres (Saskatoon) – qualified for the Grand Final at the inaugural event in Suzhou, China earlier this season. The third and final leg before the Grand Final is in Jonkoping, Sweden from Jan. 30 – Feb. 3.