Just two days after winning the Home Hardware Canada Cup with a spare in the lineup, Brad Jacobs was back his winning ways, albeit with a different spare, and about 5,000 kilometres away. 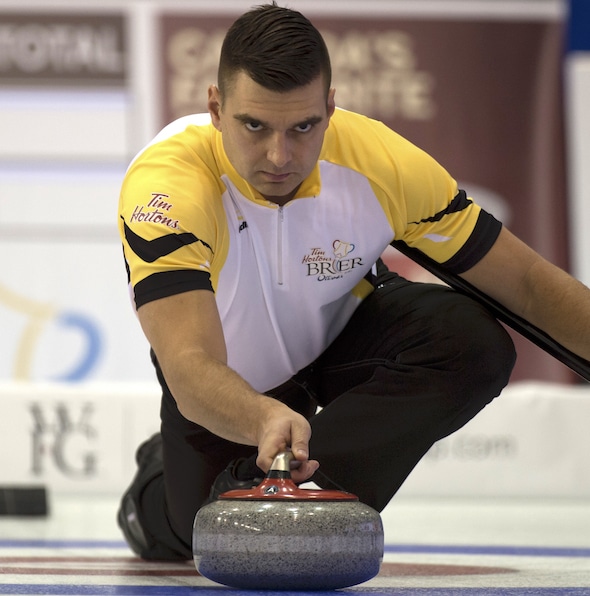 Matt Wozniak is stepping in to play for Team Jacobs at the Grand Slam Boost National. (Photo, Curling Canada/Michael Burns)

The Sault Ste. Marie, Ont., squad wrapped up its win late Sunday night in Estevan, Sask., only to hop on a flight to St. John’s on Monday, where the Grand Slam of Curling’s Boost National began on Tuesday.

Jacobs, with E.J. and Ryan Harnden, had Marc Kennedy playing in place of Ryan Fry (who is taking time off to deal with personal issues) in Estevan. In Conception Bay South, NL  – just 25 minutes from the St. John’s Airport – Jacobs won his first two games, this time with Matt Wozniak filling in for Fry.

The 15-team event features most of the top teams on the World Curling Tour Order of Merit including World No. 1 Niklas Edin (Sweden) , No. 2 Brad Gushue (St. John’s), and No. 3 Kevin Koe (Calgary).

Edin has also started with two wins, while Gushue lost his first game in an extra end to Switzerland’s Yannick Schwaller. The hometown hero rebounded and beat Scotland’s Ross Paterson in his second game. Koe – who lost the final to Jacobs in Estevan – also dropped his first, to Winnipeg’s Jason Gunnlaugson.

The top eight teams will qualify for playoffs, and the big payouts from the $125,000 purse.

On the women’s side, Ottawa’s Rachel Homan and Winnipeg’s Kerri Einarson have both started with 2-0 records. The unfortunate part for them, however, is that they’re in the same pool and somebody will have to lose before the round robin is done.

It’s a similar story for World No.1 Anna Hasselborg of Sweden and Switzerland’s Silvana Tirinzoni; both undefeated thus far, but will play each other in pool play.

Winnipeg’s Jennifer Jones, who won the title last week in Estevan, is off to a 1-1 start.

Elsewhere, two Canadian teams have made the trip to China for the Qinghai Curling Elite event in Xining, China. Regina’s Matt Dunstone and Edmonton’s Kelsey Rocque will be representing the red and white, each in a nine-team field, and each with a $30,000 purse.