A life-threatening disease won’t be stopping Calissa Daly as she competes at the 2019 New Holland Canadian Juniors. At age five, Calissa was diagnosed with Arrhythmogenic Right Ventricular Dysplasia (ARVD), a heart defect that usually causes sudden deaths in young people. As a genetic disease, both Daly’s sister Camille and brother Colton have the same condition. 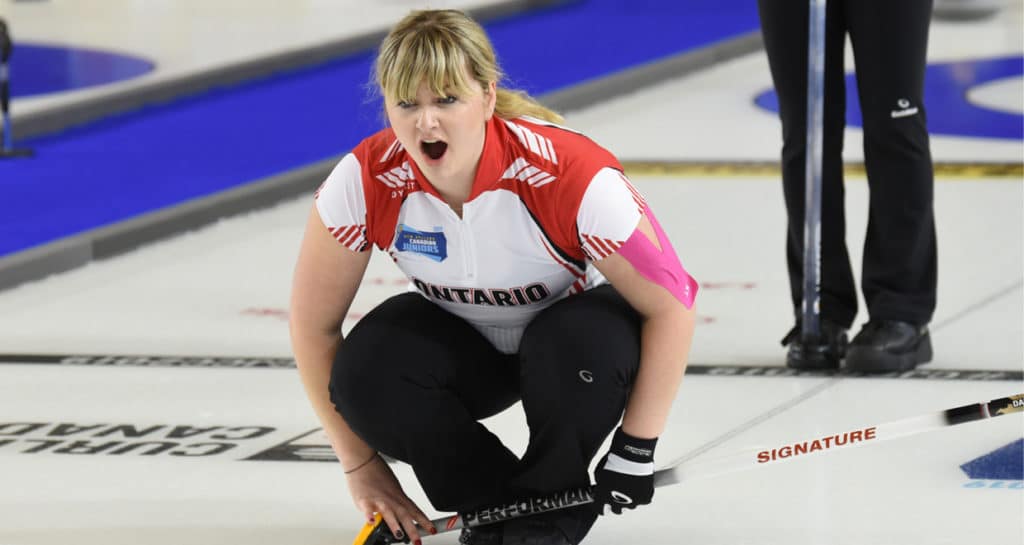 Colton was the first to be diagnosed, followed by Camille and then Calissa. A very active family of multi-sport athletes, this diagnosis meant a complete change in lifestyle in terms of activity level. “We were all training for triathlons, hockey and soccer and we had to be pulled out of everything,” said Daly. “My brother had a heart attack and that’s how we found out. Then they tested all of us. Usually when people find out, it’s too late.” Since keeping in good physical shape is ironically one of the ways to manage the disease, Calissa’s parents looked into alternative, more low-impact options and came across curling. “My brother and sister started and I was allowed on the ice early (at age five) because I would beg everyone to play,” said Daly. “I said ‘I promise, I can do this.’” For people with ARVD, they have to closely monitor their heart rate and know where the closest defibrillator is at all times, as any physical activity or anxiety can cause a concerning spike in heart rate. “I’ve learned how to pace myself. I know not to push myself too far,” said Daly. “After I sweep, I take a second (to calm down) because I think that I’d rather live than (further increasing the heart rate while) throwing a shot. I know my limits.” Daly’s parents were instrumental in getting defibrillators into many curling facilities where their children grew up playing, which has benefitted more than just the Daly family. “It saved an older person’s life in a curling club,” said Daly. “Curling is for all generations, not just young people, so you have to think of everyone. Though it’s weird being a young person and having to worry about it.” And as for how Daly manages to keep her health in check while competing in a high-stress, competitive environment for a full week? Daly takes a positive spin and explains how dealing with ARVD has improved her game. 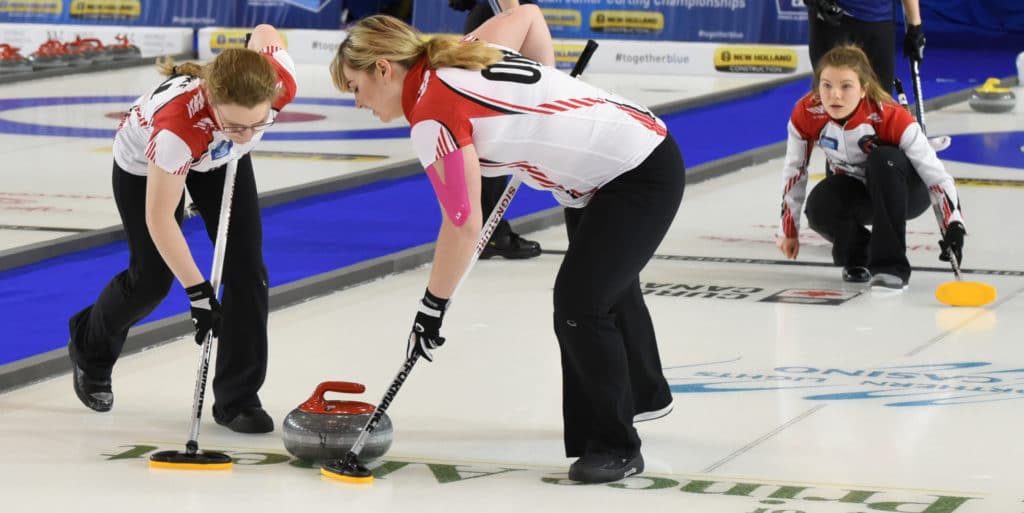 “Our game last night was a high-pressure situation and getting your heart rate down is important for everyone, but even more important for me,” said Daly. “Breathing is more of a conscious thing that I have to do (to lower my heart rate). It’s made me a better player and more mentally tough.” Safe to say that this positive attitude will not only take Daly far on the curling ice, but also in life. Daly’s Ontario team skipped by Thea Coburn improved its record to 2-2 after a 12-3 win over Sadie Pinksen from Nunavut this morning. Read more about the Daly family in our 2016 article. In the other New Holland Juniors women’s action, it came down to the wire with Nova Scotia’s Kaitlyn Jones needing a triple on her last shot to force Sarah Daniels from B.C. into a tough shot on her last. It hung wide and B.C. posted a 7-6 victory to move to 3-1 and hand the N.S. team its first loss. It was an East Coast battle on the men’s side with Nova Scotia’s Graeme Weagle having the edge over P.E.I.’s Tyler Smith in a 9-7 decision. Weagle now sits at 2-1 while Smith falls to 1-2. Team British Columbia skipped by Tyler Tardi continued with its dominant performance downing Newfoundland and Labrador’s Greg Blyde 12-4. Tardi moves to 4-0 while Blyde drops to 2-2. Desmond Young’s Alberta-based team defeated Trygg Jensen’s Yukon squad 10-2. Young improves to 2-2 and Jensen goes to 1-3. Action continues at the 2019 New Holland Canadian Juniors with draws on Monday at 2 p.m. and 7 p.m. (all times Central). Fourteen men’s and 14 women’s teams are competing, with two seven-team pools in each gender. Following Tuesday night’s games, the top four teams from each pool will move into the championship pools beginning Wednesday, while the other teams will play in seeding pool games to determine the final standings. Round-robin games at the 2019 New Holland Canadian Juniors are being streamed live exclusively on Curling Canada’s Facebook page. TSN/RDS2, the official broadcaster of Curling Canada’s Season of Champions, will provide live and exclusive coverage of the womenʼs and menʼs semifinals on Saturday, Jan. 26, and finals on Sunday, Jan. 27. The same games also will be streamed live in the U.S. on ESPN3. CLICK HERE for streaming and broadcast information. The winning teams Sunday will represent Canada at the 2019 World Junior Championships, Feb. 16-23 in Liverpool, N.S. The full scoreboard can be viewed at www.curling.ca/scoreboard/. For event information, visit www.curling.ca/2019juniors. This story will be posted in French as soon as possible at: www.curling.ca/?lang=fr