The For the Love of Curling (FTLOC) scholarship recipients are coming on strong at the 2019 New Holland Canadian Junior Curling Championships in Prince Albert, Saskatchewan. Eighteen past and present awardees are vying for the top prize in junior curling this week, and they have certainly stepped up to the task. 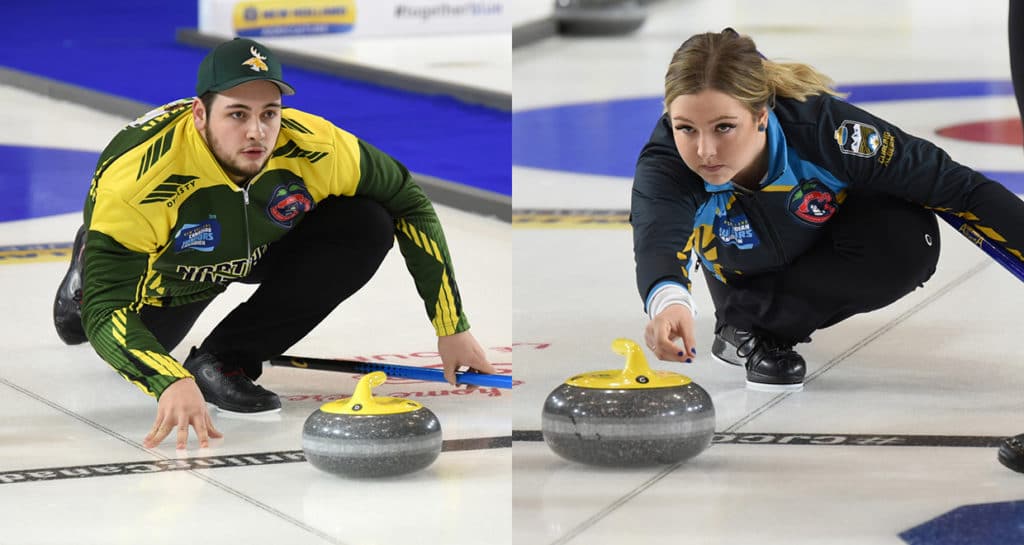 2018 recipient, and third year nursing student at the University of Alberta, Selena Sturmay has clinched a spot in the Championship Round with a perfect 6-0 record after a 10-4 victory over fellow scholarship beneficiary Kaitlyn Jones of Nova Scotia. Sturmay attributes her team’s success to strong dedication to the sport and acknowledges how the scholarship has impacted her ability to pursue high performance curling and high-level studies simultaneously. “The scholarship has allowed me to focus on curling more and taken the weight off of me financially for my academics,” said Sturmay. The Albertan skip is also quick to acknowledge the people who donated to the program in order to help fund the FTLOC scholarship program. “I would like to say a huge thank you to everyone who has supported (the FTLOC program). It’s not possible without the people who donated. I’m just super grateful for their generosity and hope it can continue.” As part of the 2018 scholarship requirements, the recipients must organize one fundraising event or initiative in support of the Curling Canada Foundation’s national youth programs in a chain of giving. Sturmay’s face lit up when asked about the fundraising and she started enthusiastically explaining her ideas. “I’m thinking of tagging along with the U-18 Championships,” said Sturmay. “Thinking of setting up a fun obstacle course in the curling club and charging entry, also running a silent auction on items I collect from some players.” Other recipients picking up a crucial wins this draw included Northern Ontario’s Tanner Horgan and Maxime Blais. The Northern Ontario men picked up a 16-3 win over Sawer Kaeser’s Northwest Territories squad. Horgan moves to 3-2 while Kaeser drops to 0-6. Horgan and Blais are both Business Administration students at Laurentian University and received the scholarships in 2018 and 2016 respectively. 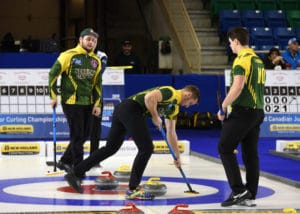 Blais cites the scholarship as having a huge impact on his ability to travel for training with his team for big competitions, such as this event, and is incredibly thankful for the generous donations. “Students aren’t the most financially stable, especially as curlers since we can’t really work in the winter,” said Blais. “I hope that I will eventually be able to donate (to the program) because it helped me out so much.” Another big component to receive the scholarship is volunteerism. Both Horgan and Blais are heavily involved in their community in between training and tournaments. “A lot of it has been sport-related for me,” said Horgan. “I’ve always been involved in coaching youth sport. I’m helping out coaching at curling camps and also coaching volleyball.” “I volunteer at a hepatitis-C clinic and have also volunteered at the curling club working with the kids curling. I volunteer as much as I can when I’m available,” added Blais. The full list of For the Love of Curlingscholarship recipients competing at the 2019 New Holland Canadian Juniors can be found below: 2018 — Tanner Horgan (Northern Ontario), Kaitlyn Jones (Nova Scotia), Ryan Lamswood (Newfoundland/Labrador), Dustin Mikush (Alberta), Kate Sherry (Northern Ontario), Selena Sturmay (Alberta) 2017 — Kira Brunton (Northern Ontario), Sarah Daniels (British Columbia), Sara Guy (Northern Ontario), Matthew Hall (originally from Ontario, now competing for B.C.), Sarah Hoag (Saskatchewan), Megan Smith (Northern Ontario), Mackenzie Zacharias (Manitoba) 2016 — Karlee Burgess (Nova Scotia), Jessica Humphries (B.C.), Sterling Middleton (B.C.), Tyler Tardi (B.C.), Maxime Blais (Northern Ontario) Also on the ice in men’s action, it was a battle for the top spot in the Pool B between Manitoba’s JT Ryan and Graeme Weagle from Nova Scotia. The Bluenosers secured a 7-4 win and now both teams sit atop Pool B with 4-1 records. In the game featuring Quebec’s Vincent Roberge and New Brunswick’s Jack Smeltzer, it was Roberge with the edge over Smeltzer, also with a 7-4 victory. Quebec climbs to 3-2 while N.B. drops to 2-3. The Host team from Moose Jaw, Saskatchewan, skipped by Skylar Ackerman, picked up its first win of the competition shutting out Nunavut’s Sadie Pinksen 15-0. The teams are at 1-5 and 0-5 respectively in Pool A. It was a barn burner between Quebec’s Laurie St-Georges and Newfoundland and Labrador’s Mackenzie Glynn with St-Georges executing a tap in the 10thend for a 5-3 victory. Picking up their fourth win of the competition, Saskatchewan’s Sara England defeated New Brunswick’s Justine Comeau by a score of 8-5. The host province is now at 4-2 with Comeau’s East Coast squad sitting at 3-2.  Action continues at the 2019 New Holland Canadian Juniors with the final round robin draw on Tuesday at 7 p.m. (all times Central). Fourteen men’s and 14 women’s teams are competing, with two seven-team pools in each gender. Following Tuesday night’s games, the top four teams from each pool will move into the championship pools beginning Wednesday, while the other teams will play in seeding pool games to determine the final standings. Round-robin games at the 2019 New Holland Canadian Juniors are being streamed live exclusively on Curling Canada’s Facebook page. TSN/RDS2, the official broadcaster of Curling Canada’s Season of Champions, will provide live and exclusive coverage of the womenʼs and menʼs semifinals on Saturday, Jan. 26, and finals on Sunday, Jan. 27. The same games also will be streamed live in the U.S. on ESPN3. CLICK HERE for streaming and broadcast information. The winning teams Sunday will represent Canada at the 2019 World Junior Championships, Feb. 16-23 in Liverpool, N.S. The full scoreboard can be viewed at www.curling.ca/scoreboard/. For event information, visit www.curling.ca/2019juniors.