The tiebreaker between Alberta’s Desmond Young and Ontario’s Sam Steep at the 2019 New Holland Canadian Juniors had it all – circus shots, nerves, and, in the end, celebration by the Albertans. Young, along with third Dustin Mikush, second Jacob Libbus, lead Gabriel Dyck and coach Bernie Panich, punched their ticket to the championship round with a 5-4 win over Ontario. 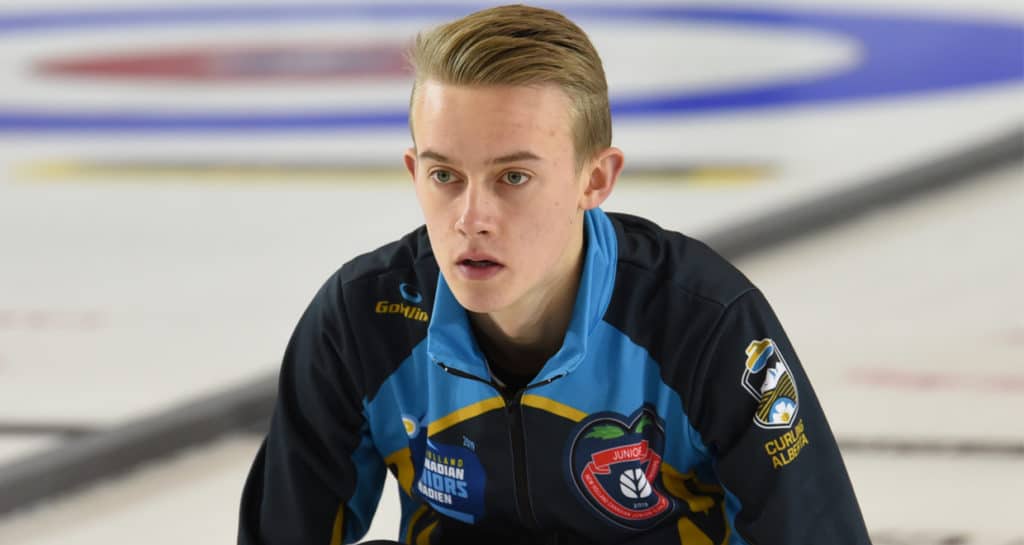 “Both of our teams are pretty evenly matched and there were some great shots made,” said Young. “It was a very exciting game and we’re very happy to come out with the win.” The first end saw Alberta take control and split the house to force Ontario to a single point. The momentum shifted to Ontario’s favour in the second end, as Young looked at three Ontario counters on his last. A perfectly executed hit tied it up for Alberta. When Young’s attempted double in the third end only managed to remove one Ontario stone, Steep made a delicate hit, avoiding a potential jam, to pick up two points and take a 3-1 lead. Ontario continued to put the pressure on in the fourth with a well-placed stone behind a guard, but Young found the four-foot on his last for the single point. In the fifth end, Alberta failed to roll onto the rings and Steep tossed his final rock through the house to maintain the hammer going into the sixth end. A flash on Young’s first rock opened the door for Ontario to put the pressure on and sit three, but it was a crucial freeze on Alberta’s final rock of the end to sit shot and force Ontario to a draw for the single to take a 4-2 lead. 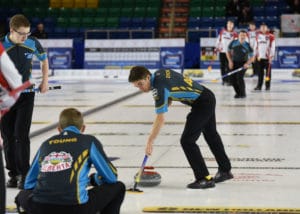 The seventh end was straightforward target practice concluding in Alberta tossing the last rock through the house to hold onto the hammer going into the eighth end. A draw on Young’s last came up 10 feet short leaving Alberta’s rock guarded in the back four-foot. It was enough to block Ontario’s last rock draw and Alberta drew for the second point to tie the game up at 4-4. There were several Ontario rocks in play at the beginning of the ninth end, but they quickly disappeared with a series of doubles by Alberta. Steep made the hit on his last to blank the end and carry hammer to end 10. The Albertans set up the 10th perfectly for the steal, taking advantage of an Ontario rock that slipped to the back button. “We were playing really aggressively right from the start,” said Young. “The guys made all their shots and that made it really easy for me at the end.” On his last, Steep was facing a pile of Alberta rocks in the four-foot and needed to run a guard into the lone Ontario rock in the pile to pick up the win. The sweepers were on and off, but a slight oversweep resulted in a miss and a 5-4 win for Alberta. Mission accomplished for the Edmonton-based squad. There were fists pumped and hugs from the exuberant family cheering section, but Young refocused, quickly noting that there’s still work to be done starting with their next game at 7 p.m. Central against Manitoba. “Our first goal was to get to the championship pool. Now the next level is here and we’re going to just take it one game at a time.” The top four teams from each pool have moved into the championship pool beginning Wednesday at 2 p.m., while the other teams will play in seeding pool games to determine the final standings. Alberta at 3-3 advances to the championship round on the men’s side with B.C.’s Tyler Tardi (6-0), Saskatchewan’s Rylan Kleiter (5-1), Vincent Roberge representing Quebec (4-2), 2018’s second place team from Northern Ontario skipped Tanner Horgan (4-2), Graeme Weagle from Nova Scotia (4-2), Manitoba’s JT Ryan (4-2), and Greg Blyde’s Newfoundland and Labrador squad (3-3). Ontario (3-3) joins the men’s seeding pool along with Jack Smeltzer of New Brunswick (3-3), P.E.I.’s Tyler Smith (2-4), Trygg Jensen representing the Yukon (1-5), Nunavut’s Javen Komaksiutiksak(0-6), and Sawer Kaeser from the Northwest Territories (0-6). On the women’s side, the teams advancing to the championship round are Alberta’s Selena Sturmay (6-0), Sarah Daniels’ squad from British Columbia (5-1), Manitoba’s Mackenzie Zacharias (5-1), Laurie St-Georges from Quebec (5-1), Saskatchewan’s Sara England (4-2), the defending champions from Nova Scotia skipped by Kaitlyn Jones (4-2), Justine Comeau’s team from New Brunswick (4-2), and Kira Brunton’s Northern Ontario squad (3-3). Ontario’s Thea Coburn (2-4), Newfoundland and Labrador’s Mackenzie Glynn (2-4), Lauren Ferguson from P.E.I. (1-5), the Host team skipped by Skylar Ackerman (1-5), Sadie Pinksen’s Nunavut team (0-6), and Tyanna Bain representing Northwest Territories (0-6) will all compete in the seeding pool. Action continues at the 2019 New Holland Canadian Juniors with draws on Wednesday at 2 p.m. and 7 p.m. (all times Central). Round-robin games at the 2019 New Holland Canadian Juniors are being streamed live exclusively on Curling Canada’s Facebook page. TSN/RDS2, the official broadcaster of Curling Canada’s Season of Champions, will provide live and exclusive coverage of the womenʼs and menʼs semifinals on Saturday, Jan. 26, and finals on Sunday, Jan. 27. The same games also will be streamed live in the U.S. on ESPN3. CLICK HERE for streaming and broadcast information. The winning teams Sunday will represent Canada at the 2019 World Junior Championships, Feb. 16-23 in Liverpool, N.S. The full scoreboard can be viewed at www.curling.ca/scoreboard/ For event information, visit www.curling.ca/2019juniors. This story will be posted in French as soon as possible at: www.curling.ca/?lang=fr