PRINCE ALBERT, SASK. — For most of the week, Saskatchewan’s Sara England has been focussed on the task at hand; calling a strategically-sound game and making her shots. But on Wednesday night at the New Holland Canadian Juniors in Prince Albert, Sask., the hometown skip opened her ears and embraced the noise of the crowd. It paid off, as she and her Callie Curling Club-based team from Regina defeated the defending world champion. 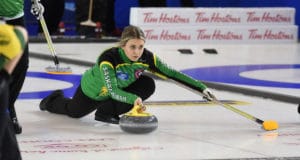 England defeated 2018 national and world junior champion Kaitlyn Jones and her Halifax Curling Club team out of Nova Scotia 8-2 during Draw 15 at the Art Hauser Centre. For the first time in the event she took some time to embrace the crowd and feed off its energy. “The crowds are crazy for Saskatchewan,” England said. “I think now we’re starting to feed off the energy and just building, as we saw in that game. Personally I’m feeling it a lot more too.” Saskatchewan pulled away in the seventh end. England made a delicate hit on her first to sit two in the four-foot, forcing Jones to play a difficult in-off which she narrowly missed. England capitalized on the error with a draw for three and a 6-2 lead. “It forced her into a pretty tough shot and luckily got a break on that. Then the girls just swept it to four-foot and that’s what you want as a skip, too; is just have your sweepers know how to put a rock on the tee for you,” England said. Saskatchewan stole another two in the eighth end to seal the deal. England is playing in her third consecutive New Holland Canadian Juniors and second as a skip with much improvement. She made her skip debut in 2018 with a 3-6 record, but now her team is playing in the Championship Pool with a 5-2 record; an improvement she contributes to a consistent lineup and great communication on and off the ice with her teammates. Jones and Nova Scotia sit at 4-3 in the Championship Pool.

Kaitlyn Jones and her team from Nova Scotia have a 4-3 record at the 2019 New Holland Canadian Juniors in Prince Albert, Sask. (Photo, Curling Canada/Melanie Johnson)

The skips have a long history in junior curling. Before they were opponents, they were teammates. Jones and England first rose to prominence at the junior level in 2015 as back end for the Saskatchewan women’s team at the Canada Winter Games in Prince George, B.C. Jones, as skip, and England, at third, won bronze at that year’s event. The pair also represented Saskatchewan at the 2017 Canadian juniors, finishing an even .500. “It’s always fun to play against your past teammates. You want to see everyone do well and it’s nice to see that she still gets to come to nationals and we get to come to nationals and we meet each other regardless of where we are in the country,” England said. Their paths have crossed once at the New Holland Canadian Juniors in the Championship Pool and there’s definitely potential these two teams could meet again later in the week. Also in the women’s Championship Pool: Northern Ontario’s Kira Brunton (4-3) of Curl Sudbury picked up a crucial 8-3 win against New Brunswick’s Justine Comeau (4-3) of the Capital Winter Club in Fredericton. Northern Ontario capitalized with three scores of two and limiting New Brunswick to singles throughout the game. In the women’s seeding pool Tyanna Bain (1-6) of the Northwest Territories (Inuvik Curling Club) picked up her victory of the championship, a close 7-6 victory against Nunavut’s Sadie Pinksen (Iqaluit Curling Club) who remains winless at 0-7. In the men’s Championship pool, Manitoba’s JT Ryan (5-2) of the Assiniboine Memorial Curling Club in Winnipeg rolled through Alberta’s Desmond Young (3-4) from the Saville Community Sports Centre in Edmonton by score of 10-3. Newfoundland and Labrador’s Greg Blyde (RE/MAX Centre/St. John’s Curling Club) defeated Nova Scotia’s Graeme Weagle (Chester Curling Club) 10-6. Both teams now have 4-3 records. In the men’s Seeding Pool New Brunswick’s Jack Smeltzer (4-3) and his team from the Capital Winter Club in Fredericton had steals of two in the second and three in the fifth to secure a 10-4 victory over Trygg Jenson’s Yukon-based team from the Whitehorse Curling Club that now sits at 1-6. There was also a closely-contested battle between the final two winless teams, Nunavut’s Javen Komaksiutiksak (Iqaluit Curling Club) and Sawer Kaeser of the Northwest Territories (Fort Smith Curling Centre/Winter Sports Centre) at the Prince Albert Golf and Curling Club. The Northwest Territories won 8-5 and now have a 1-6 record, while Nunavut sits at 0-7. Action continues at the 2019 New Holland Canadian Juniors with draws on Thursday at 9 a.m., 2 p.m. and 7 p.m. (all times Central). Round-robin games at the 2019 New Holland Canadian Juniors are being streamed live exclusively on Curling Canada’s Facebook page. TSN/RDS2, the official broadcaster of Curling Canada’s Season of Champions, will provide live and exclusive coverage of the womenʼs and menʼs semifinals on Saturday, Jan. 26, and finals on Sunday, Jan. 27. The same games also will be streamed live in the U.S. on ESPN3. CLICK HERE for streaming and broadcast information. The winning teams Sunday will represent Canada at the 2019 World Junior Championships, Feb. 16-23 in Liverpool, N.S. The full scoreboard can be viewed at www.curling.ca/scoreboard/ For event information, visit www.curling.ca/2019juniors. This story will be posted in French as soon as possible at: www.curling.ca/?lang=fr