Patience was the name of Sarah Daniels’s game during the women’s tiebreaker match at the 2019 New Holland Canadian Junior Curling Championships. Daniels and her British Columbia team from the Delta Thistle Curling Club in North Delta waited for the seventh end before striking in the women’s semifinal at the Art Hauser Centre. 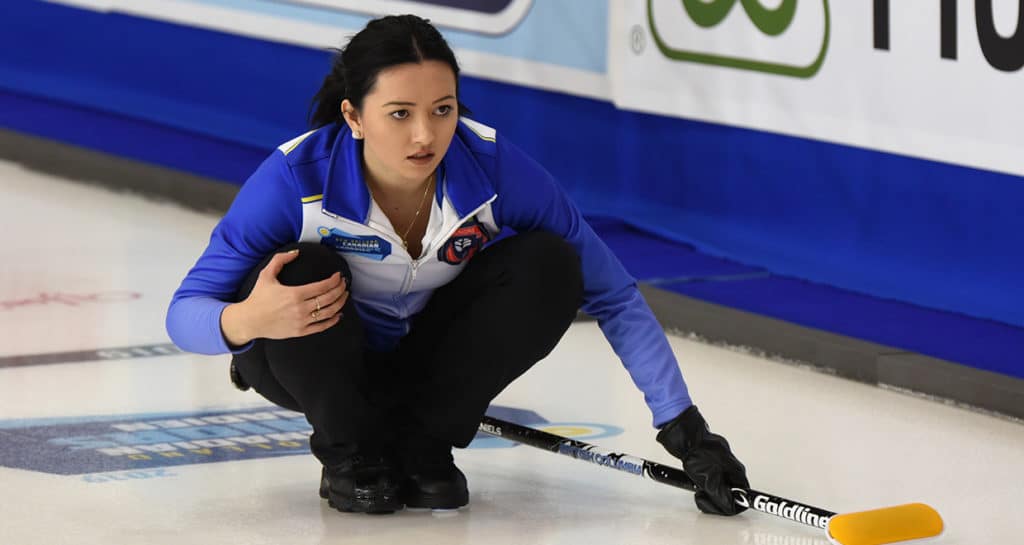 Sarah Daniels capitalized on a four-ender in the seventh end to defeat Quebec’s Laurie St-Georges 8-6 in the tiebreaker game at the 2019 New Holland Canadian Juniors. (Photo, Curling Canada/Melanie Johnson)

A few key misses from Quebec in the seventh end led to a stellar double by Daniels. B.C. removed two Quebec stones on the side of the four-foot to sit four and take a 6-4 lead. While Quebec tied the game the following end, B.C. blanked the ninth and scored a hammer deuce in the final frame for the win.

“We played the game just a little bit cleaner than what we usually do,” Daniels said. “We just wanted to make (our shots} makable and then when we saw an opportunity we went for it and in that end we definitely had an opportunity.”

It was an important bounce back game for British Columbia as the team suffered a 9-4 loss to New Brunswick on Friday morning forcing Canada’s westernmost province into the afternoon tiebreaker. Quebec was in a similar situation after losing its game against Nova Scotia’s Kaitlyn Jones (Halifax Curling Club) this morning. Nova Scotia, British Columbia and Quebec all finished the Championship Pool with 7-3 records and tied for the final two playoff spots. Nova Scotia received a berth into the semifinal due to having the best Last Stone Draw distance while the other two teams needed to settle with the tiebreaker.

B.C. now plays Nova Scotia in the semifinal on Saturday at 1 p.m. Nova Scotia edged British Columbia 8-7 during preliminary-round action at the New Holland Canadian Juniors. The winner faces Alberta’s Selena Sturmay (Saville Community Sports Centre, Edmonton), who is flawless at the event so far with a 10-0 record, in Sunday’s final at 10 a.m. (all times CST)

“I think all the preparation that we’e done throughout the entire season, just trying to stay together as a team no matter what. Through bad games, through good games and just trying to get a handle on the ice. That’s why we came out a little bit cleaner this game,” Daniels said.

TSN/RDS2, the official broadcaster of Curling Canada’s Season of Champions, will provide live and exclusive coverage of the womenʼs and menʼs semifinals on Saturday, Jan. 26, and finals on Sunday, Jan. 27. The same games also will be streamed live in the U.S. on ESPN3. CLICK HERE for streaming and broadcast information.