PRINCE ALBERT, SASK. — Sarah Daniels of British Columbia once again capitalized on a big end to win an important game. This time, it secured her spot in the women’s final at the 2019 New Holland Canadian Juniors. 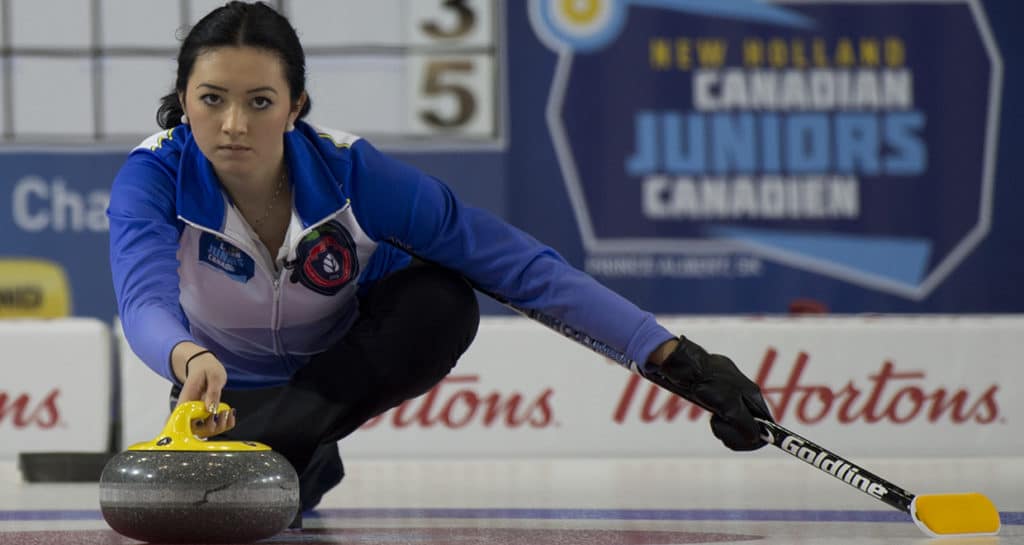 Daniels scored four in the third end, which helped propel her team from the Delta Thistle Curling Club in North Delta to victory. British Columbia defeated defending national and world champion Kaitlyn Jones from Nova Scotia’s Halifax Curling Club 9-7 at the Art Hauser Centre in Prince Albert, Sask. After exchanging single points in the first two ends, British Columbia opened the game up in the third with a four-ender. Daniels punched a British Columbia rock into the pile of granite in the four-foot, resulting in a successful runback double to lay five counters. Nova Scotia responded with a double, but it left Daniels, vice-skip Kayla MacMillan, second Jessica Humphries, lead Sarah Loken and coach Katie Witt with a draw to the button for four and 5-1 lead. “Getting that four was huge for us, settle our nerves and all that, it’s good,” said Daniels, a 19-year-old health sciences student at Simon Fraser University. Down but not out, Nova Scotia cut into the lead in the fourth end. After missing her first draw to sit three, Jones had an opportunity to hit for two and capitalized, cutting into B.C.’s lead at 5-3. In the fifth, Daniels was left with a freeze for one, elevating British Columbia to a 6-3 lead at the fifth-end break. Nova Scotia continued to press and fought back into the game. After taking one in the sixth end with hammer, Nova Scotia produced a steal in the seventh. Jones made a highlight-reel triple on all three of British Columbia’s shot stones. Daniels had a hit for one, but after the rock settled Nova Scotia was closest to the button and scored one to trail 6-5. British Columbia scored two points in the eighth. Nova Scotia jammed a hit on its last which left Daniels with second and third shot in the back-12. Nova Scotia was shot stone and slightly behind cover, but B.C. picked it out to score and take the 8-5 lead. Nova Scotia needed to produce at least a score of two in the ninth end and took advantage of a key miss to do so. British Columbia flashed its final hit attempt leaving Nova Scotia with a draw for two to trail 8-7 heading into the final end. 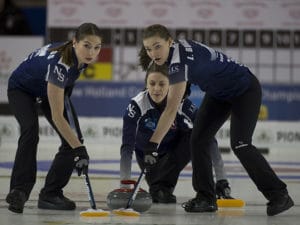 Nova Scotia’s Kaitlyn Jones, along with sweepers Karlee, at left, and Lindsey Burgess attempted a comeback in the semifinal against British Columbia, but it was dashed short in a 9-7 loss. (Photo, Curling Canada/Michael Burns)

But the comeback wasn’t in the cards for Jones, vice-skip Lauren Lenentine, second Karlee Burgess, lead Lindsey Burgess and coach Andrew Atherton. In the 10th, Jones nearly made a difficult double tap, but her counting stone rolled too far to the open side, leaving Daniels with a hit for one and 9-7 win. “I’m really proud of (my teammates),” said Jones. “We battled right till to the end. If I’d made my last shot I think it would have been tough for her to make her draw because she hadn’t played a draw in a long time.” British Columbia plays Alberta’s undefeated Selena Sturmay in the gold-medal game on Sunday at 10 a.m. (all times Central). Daniels has played in two New Holland Canadian Junior finals before. She won silver in 2016 as skip in Stratford, Ont., and played second for Kalia Van Osch in 2014 at Liverpool, N.S. She’s seeking British Columbia’s first junior women’s title since Corryn Brown won in 2013. “I think we feel pretty good, no different than we have all season. We’ve worked really hard to get here so we’ll just let our preparation carry us forward,” said Daniels. The men’s semifinal is tonight at 7 p.m. Second-ranked Rylan Kleiter of Saskatchewan (Sutherland Curling Club, Saskatoon) takes on third-seed JT Ryan of Manitoba representing Winnipeg’s Assiniboine Memorial Curling Club. The winner gets the chance to win gold against British Columbia’s Tyler Tardi (Langley and Victoria Curling Clubs) who is seeking his third-straight Canadian junior title. TSN/RDS2, the official broadcaster of Curling Canada’s Season of Champions, will provide live and exclusive coverage of the womenʼs and menʼs semifinals on Saturday, Jan. 26, and finals on Sunday, Jan. 27. The same games also will be streamed live in the U.S. on ESPN3. CLICK HERE for streaming and broadcast information. The winning teams Sunday will represent Canada at the 2019 World Junior Championships, Feb. 16-23 in Liverpool, N.S. The full scoreboard can be viewed at www.curling.ca/scoreboard/ For event information, visit www.curling.ca/2019juniors. This story will be posted in French as soon as possible at: www.curling.ca/?lang=fr