In a league of their own: Tardi, Middleton claim third consecutive New Holland Canadian Junior title for British Columbia

PRINCE ALBERT, SASK. — British Columbia skip Tyler Tardi and vice-skip Sterling Middleton etched their names in the record book on Sunday night at the Art Hauser Centre in Prince Albert, Sask. The duo won their third New Holland Canadian Juniors title in a row, a feat that has never been accomplished before. 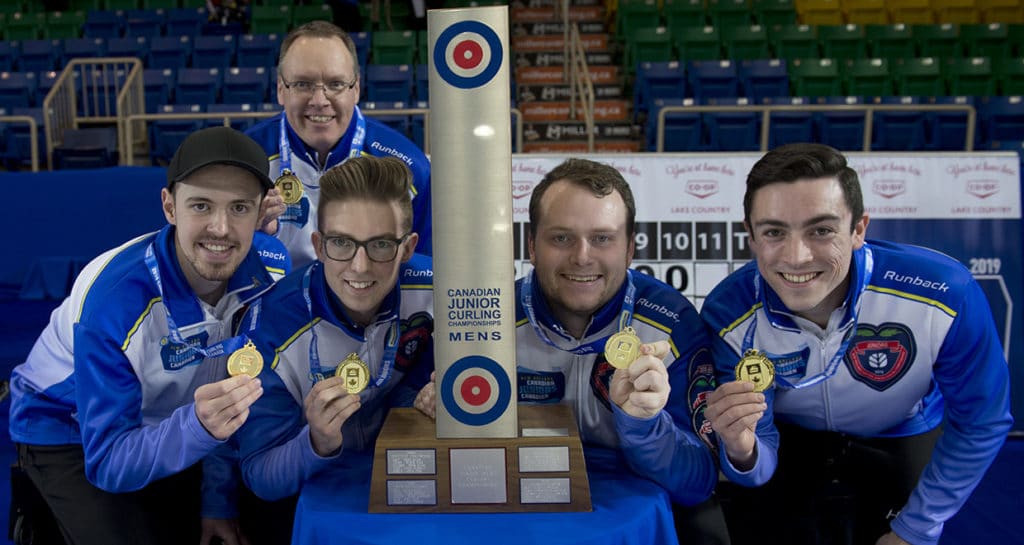 Tardi, Middleton, second Matt Hall, lead Alex Horvath and coach Paul Tardi defeated Manitoba’s JT Ryan of the Assiniboine Memorial Curling (Winnipeg) 7-5 in the Canadian junior men’s final. With the win, Tardi and Middleton surpass the likes of John Morris, Craig Savill and Brent Laing – among others – who have all won back-to-back titles, but never a third. 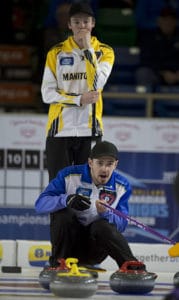 “It’s unreal the fact that this has only been done twice before and how this is such a rare feat,” Tardi said of his accomplishment with Middleton. “It’s an incredible feeling and to be doing it with one of my best friends is extra special.” The team from the Langley and Victoria Curling Clubs opened the scoring in the second end with an angle raise takeout for three. But Manitoba’s Ryan took control of the middle portion of the game. Ryan, vice-skip Jacques Gauthier, second Jordan Peters, lead Cole Chandler and coach John Lund scored two in the fourth and followed it with a steal of two in the fifth to lead by one point heading into the fifth-end break. “We’re no stranger to giving up threes early. If you’re going to give up a three you want to give it up in the second end. We know we’ve been resilient all week and we knew if we could string some shots together we could battle back and that’s what we did,” Ryan said. But British Columbia took control in the latter part of the game with a deuce in the eighth and a steal of one in the ninth end to lead 6-5. Manitoba had hammer in the final end, but over-swept its final attempt, causing the stone clip off another and give up a steal of one. “They played unreal and we played one of our best games I’d say we ever played together too. It just wasn’t enough. It was an inch here or there,” Ryan said. Tardi and Middleton won their first New Holland Canadian Juniors title in 2017 in Victoria against their current second Hall, who was representing Ontario at the time. “It was very emotional to see him kind of go crazy there,” Middleton said of his second’s reaction to winning the national title. “That’s how we all felt on our first one and I’m really excited he was on the right side of that one this time, because there’s no worse feeling than losing a big game like that.” The pair returned as part of the British Columbia team in Shawinigan, Que., in 2018 and defeated Northern Ontario’s Tanner Horgan in the final. While all three victories were sweet, Tardi believes they all hold a part in his memory for distinct reasons. “It’s hard to pinpoint one that’s most special,” he said. “The first is unreal just because it’s the first time. Second we got to tie the record with some of the great junior curlers like John Morris and now to pass them is just an unbelievable feeling.” The team will represent Canada at the 2019 World Junior Curling Championships in Liverpool, N.S. this Feb. 16-23. The full scoreboard can be viewed at www.curling.ca/scoreboard/ For event information, visit www.curling.ca/2019juniors. This story will be posted in French as soon as possible at: www.curling.ca/?lang=fr