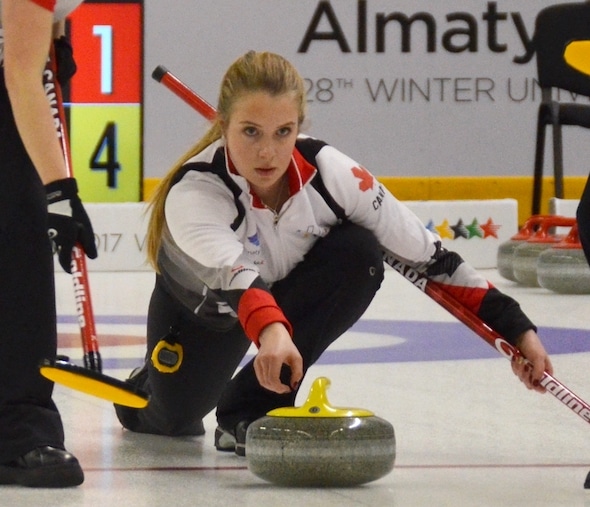 Schmiemann, who will lead Canada into the Opening Ceremony, headlines the first 61 members of the delegation announced Thursday, set to compete March 2-12 in Krasnoyarsk, Russia. At the last Winter Universiade in Almaty, Kazakhstan, Schmiemann helped her Alberta rink win Canada’s only gold medal of the Games.

“I am extremely honoured to have been selected to represent not only curling, but our entire Canadian Delegation at the Opening Ceremony of the 2019 FISU Winter Universiade,” said Schmiemann, who won a U SPORTS championship with the Pandas last season at Leduc, Alta., and competes on the World Curling Tour with 2017 flag bearer and former University of Alberta teammate Kelsey Rocque. “Earning the opportunity to wear the Maple Leaf on your back is always a dream come true, and being able to carry the flag for Canada gives me a great amount of pride and excitement for the upcoming Games.”

Schmiemann will be playing vice-skip for the Canadian women’s team that will be skipped by 2017 Canadian junior women’s champ Kristen Streifel and will be rounded out by second Selena Sturmay, lead Jesse Iles, alternate Paige Papley and coach Garry Coderre. This past weekend in Prince Albert, Sask., Sturmay (skip) and Papley (lead) won gold for Alberta at the New Holland Canadian Junior Women’s Championship, and will play at the World Junior Championships next month in Liverpool, N.S.

The preliminary delegation includes the Canadian teams in five sports, including alpine and cross skiing, biathlon, curling and snowboard. All five teams are selected and managed in partnership with each respective National Sport Organization (NSO).

The Canadian men’s and women’s hockey teams – which will be exclusively composed of U SPORTS student-athletes – will be announced at a later date, following the initial rounds of the conference playoffs, which overlap with this year’s FISU Winter Universiade.

“This is a watershed moment for those who have received a nomination today and a testament to their hard work and dedication,” said Roger Archambault, who was selected as Team Canada Chef de Mission for the 2019 FISU Winter Universiade last September and has served as the Assistant Athletic Director with the Ottawa Gee-Gees, as well as the Manager of Team Services with the Canadian Olympic Committee (COC) at Beijing 2008, Vancouver 2010 and London 2012. “Representing Canada on the world stage is a rare opportunity, together as one team, our student-athletes, coaches, and mission staff will carry the Canadian flag with pride as we compete against the world on this one of a kind sports stage. I am already very proud of this group.”

“We are extremely proud of every student-athlete and staff member representing Team Canada at the 2019 FISU Winter Universiade,” said Lisette Johnson-Stapley, Chief Sport Officer at U SPORTS. “The FISU Games are the Olympics of University Sport. So many memories are made on and off the field of play for our Canadian student-athletes, who are unique in that they balance academics with athletics, and they deserve the chance to wear the maple leaf. We are looking forward to supporting all of our teams as they go for gold in Russia this winter.”

To support Team Canada through the Be a Game Changer RallyMe fundraising campaign click here.