Sunday was a good day for Canadian curlers at the third leg of the Curling World Cup in Jönköping, Sweden, as mixed doubles duo Kadriana Sahaidak and Colton Lott and the Regina foursome of Matt Dunstone, Braeden Moskowy, Catlin Schneider and Dustin Kidby – all coached by Scott Pfeifer – won gold medals and a ticket to the Grand Final in Beijing. 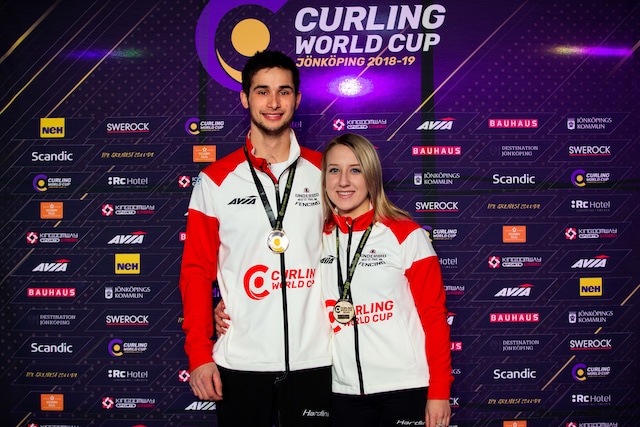 “It’s huge,” said a jubilant Sahaidak after the game. “We’ve both never been to China so we’re going around the world and we’re pretty ecstatic.” The Winnipeg Beach duo came out firing against Norway’s Kristin Skaslien and Thomas Ulsrud, building a 4-2 lead at the break after a couple of stolen ends. But Norway fought back with a steal of their own in the seventh to tie things up. When Skaslien’s draw attempt wrecked, Canada was left lying two for the 7-5 win and a gold medal. “It means everything,” said Lott. “We’ve been in a couple of tough finals – we lost the national final in Canada and then we lost the CanadInns this year. So to finally come through in that final it was huge especially being at an international event representing Canada.” After kicking off the competition with an upset win over world-champion Switzerland on Wednesday, the young Canadian duo found themselves battling in a number of tight games throughout the round robin. “It helped us be more positive,” Lott said. “Even if we’re down by a few you can always come back in this game.” Even the steal by Norway in seven didn’t disrupt their outlook, said Sahaidak. “We just said ‘forget about it, let’s just keep playing like we do, we got it.’” For Dunstone, the men’s final against Sweden’s Niklas Edin took a couple of dramatic turns. In the sixth, trailing 4-2, and facing a house full of Canadian stones, Edin made a spectacular triple on his first shot, then tied it up when Dunstone’s open hit unexpectedly wrecked on a guard. In the seventh, it was Edin who came up short when his draw to lie two missed the rings, leaving an open hit for Dunstone to blank. A series of perfect tick shots in eight left Dunstone an open nose hit for the 5-4 win. 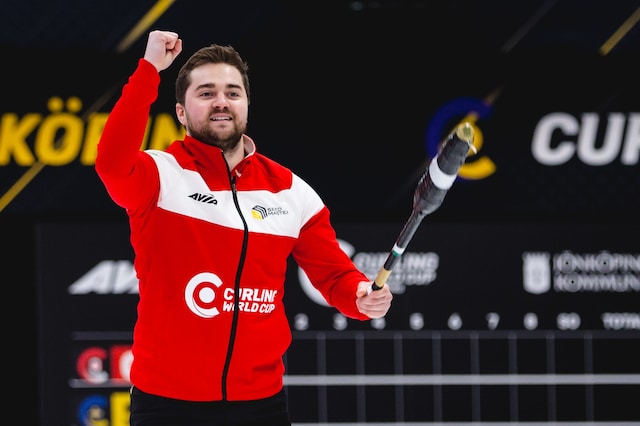 “I think we made a statement this week for sure,” said Dunstone. “We didn’t even expect to be in this event at the beginning of the year so to come here and take advantage of it beating a world-class team like Niklas Edin, we’re going to be celebrating this one.” In addition to winning prize money, Sahaidak/ Lott and Dunstone have now qualified for the Curling World Cup Grand Final, May 8-12, in Beijing, along with Laura Walker/Kirk Muyres and teams skipped by Rachel Homan and Kevin Koe. “It will be a heck of a field,” said Dunstone. “I never thought in a million years I would be in China twice in sixth months. It will be a lot of fun, another world-class event I’m sure and hopefully win another chunk of change there.” South Korea’s Minji Kim upset Sweden’s Anna Hasselborg 6-4 in the women’s final. Canada’s Darcy Robertson and her Winnipeg team of Karen Klein, Vanessa Foster and Theresa Cannon didn’t qualify for the playoffs. For more information on the Curling World Cup, CLICK HERE. 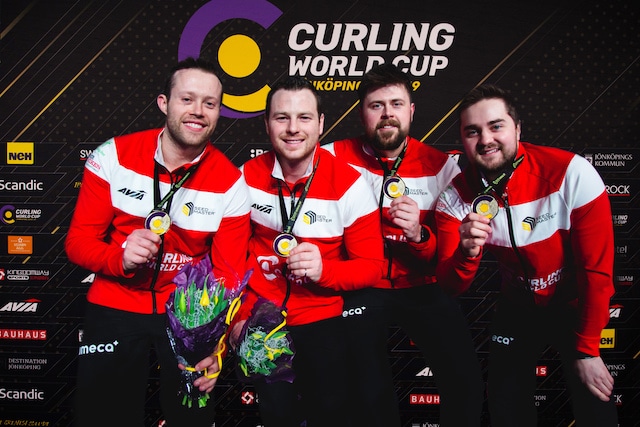