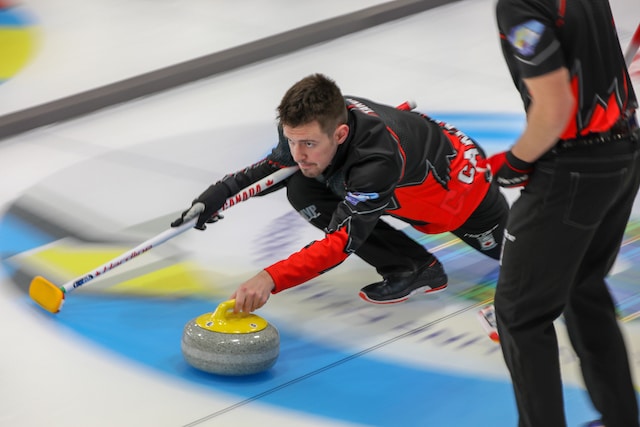 For Tardi, third Sterling Middleton, second Matt Hall, lead Alex Horvath, alternate Rylan Kleiter and coach Paul Tardi, the task of defending the world title they won last season in Aberdeen, Scotland, got off to a slow start. Leading 6-3 after seven ends, Team Canada fell victim to some misses in the eighth, giving Stopera an open hit for three to tie it up. The American foursome stole another point in nine when Tardi’s hit and roll over-curled and missed the mark. In ten, trailing by one, Tardi made a precise hit and roll to score one and force an extra end, and it took a measurement to determine that Stopera’s final hit in the eleventh hadn’t rolled too far. “I think we didn’t play too bad, we just let it kind of get away from us at the end,” said Tardi afterwards. “We were happy with the way we were playing. Maybe it was just a little bit of jitters were in there. But I think we’ll be able to get it all out of our system, have a good practice, and we’ll be ready for what’s coming up.” Tardi and crew are back on the ice on Sunday, facing Norway’s Magnus Ramsfjell at 2 p.m. ET. Women’s action kicks off on Sunday morning. Alberta’s Selena Sturmay, third Abby Marks, second Kate Goodhelpsen, lead Paige Papley, alternate Karlee Burgess and coach Amanda-Dawn St. Laurent will play their first two games of the round robin on Sunday against Scotland’s Lisa Davie (8 a.m. ET) and USA’s Cait Flannery (7 p.m. ET.) This game will be streamed on World Curling Federation’s Youtube channel. The Canadian teams will be in a 10-team (of each gender) round-robin draw that leads to the four-team Olympic-style semifinals (first place vs. fourth place; second place vs. third place), on Friday, February 22 (there will be no playoff tiebreakers). Event information, including news and live scoring, are available at the event website, https://www.worldcurling.org/wjcc2019 As well, selected games will be streamed live on the World Curling Federation’s Youtube channel, https://www.worldcurling.org/wjcc2019/live-stream