SYDNEY, N.S – Jennifer Jones doesn’t often miss crucial shots, and when she does it usually doesn’t take long to redeem herself. She was at it again Saturday evening, overcoming struggles with the ice to get her Team Canada off on a winning note at the 2019 Scotties Tournament of Hearts at Centre 200. The six-time Scotties champion and 2014 Olympic gold-medallist (1-0, Winnipeg) made a last-rock hit and stick – with her shooter just hanging on as shot rock – to get past a stubborn Robyn Silvernagle of Saskatchewan, 6-5. “I liked the way I threw it and all of a sudden it started curling. Jocelyn (Peterman), the inside sweeper there, really held it and won the game for us,” Jones said of her final shot. “The ice was a little bit tricky, there was some frost … we’ll just put this under our belt and be thankful for the win.” Jones came up short on a last-rock draw in the sixth end that allowed Silvernagle (0-1, North Battleford) to steal one and tie the game 3-3. One end later Jones made a solid hit-and-stick inside the four foot to score two and regain control of their Draw 2 match. Silvernagle matched that in the eighth to score her own deuce and again tie the game that saw both skips struggle. Jones finished with a 66 per cent shooting average, with Silvernagle at 64 per cent. Only the two leads finished above 70 per cent. The veteran Jones made a crucial raise double with her final stone in nine to blank the end and keep the critical hammer for the 10th. Jones, with vice-skip Kaitlyn Lawes, second Jocelyn Peterman, lead Dawn McEwen, alternate Jill Officer and coach Viktor Kjäll, scored two in the second, stole one in the third and got another deuce in seven. 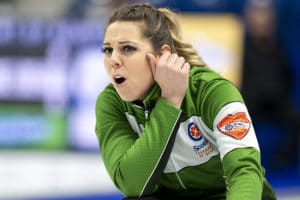 Saskatchewan’s Robyn Silvernagle couldn’t get the best of Canada’s Jennifer Jones during Draw 2 action at the Scotties Tournament of Hearts, falling 6-5 in her opening game of the championship. (Photo, Curling Canada/Andrew Klaver)

Silvernagle, backed by vice-skip Stefanie Lawton, second Jessie Hunkin, lead Kara Thevenot, alternate Marliese Kasner and coach Lesley McEwan, countered with singles in the first, fourth and sixth ends and their deuce in eight. “It was a battle,” Silvernagle said. “It was definitely a struggle for me at the beginning of the game, but the girls really helped me out and kept me in it. Then I was able to get a feel for draw weight so that helped.” In the other games Saturday evening Casey Scheidegger of Lethbridge, Alta., (1-0), playing here as the wild-card team, scored three in the third end to roll past Nicole Baldwin of Yukon (0-1, Whitehorse) 10-2; Kerry Galusha of Northwest Territories (1-0, Yellowknife) cracked a five-ender in the eighth to subdue Andrea Crawford of New Brunswick (0-1, Saint John) 11-5 and Suzanne Birt of Prince Edward Island (1-0, Charlottetown) scored deuces in the first three ends and four in the fifth to cruise past Kelli Sharpe of Newfoundland and Labrador (0-1, St. John’s) 14-3. The 2019 Scotties Tournament of Hearts continues with draws tomorrow at 9:30 a.m., 2:30 p.m. and 8 p.m. (all times AST). Live scoring, standings and statistics for the 2019 Scotties Tournament of Hearts are available at www.curling.ca/scoreboard/ TSN and RDS2 (streamed on ESPN3 in the United States) will provide complete coverage of the 2019 Scotties Tournament of Hearts. CLICK HERE for the complete schedule. For ticket information for the 2019 Scotties Tournament of Hearts, go to www.curling.ca/2019scotties/tickets/   This story will be available in French as soon as possible at www.curling.ca/2019scotties/category/nouvelles/?lang=fr