It was a battle of last year’s finalists as Canada’s Tyler Tardi and Scotland’s Ross Whyte faced off on Monday night in Liverpool, N.S., but this time it was Scotland who came out on top, taking an 8-7 extra-end decision in the men’s round robin at the 2019 World Junior Curling Championships. 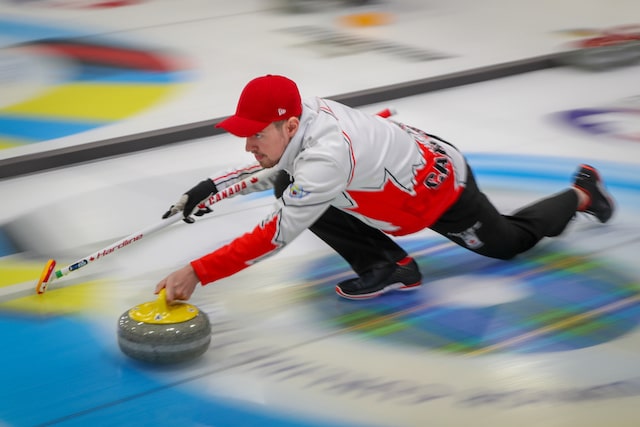 Tardi, third Sterling Middleton, second Matt Hall, lead Alex Horvath, alternate Rylan Kleiter and coach Paul Tardi kept things simple for the first few ends, but Scotland – the only undefeated team in the competition after three draws – were on the offence as soon as they got hammer back. The ends got more and more complicated, with lots of rocks in play and no easy shots. “They’re a great team,” said Tardi. “We’re expecting to see them around at the end of the week. There’s a lot of teams still in it. Good battle, a lot of good, but there’s a few things we’re probably going to address and fine tune to hopefully erase those things in the future.” Trailing 7-6 in the tenth, with no guards out front, Tardi elected to draw a second rock to the four-foot, but Whyte’s run-back just missed, giving Canada the steal to tie it up. In the extra end, Tardi had a chance to freeze his last shot to a Scottish stone on the four-foot, but his rock went deep, giving up the single without Whyte having to throw his final shot. The Canadian men now move to 2-2 in the standings behind Scotland (4-0) Norway (3-1) and New Zealand (3-1). They will be back on the ice on Tuesday for one game, at 1 p.m. ET against Italy’s Luca Rizzolli (1-2). In women’s action, Canada’s Selena Sturmay, third Abby Marks, second Kate Goodhelpsen, lead Paige Papley, alternate Karlee Burgess and coach Amanda-Dawn St. Laurent picked up their second win, a 9-6 victory over Japan’s Ami Enami in their only game of the day on Monday. On Tuesday, they will face Sweden’s Tova Sundberg at 8 a.m. ET and South Korea’s Minji Kim at 6 p.m. ET. (This game will be streamed on World Curling Federation’s Youtube channel.) Event information, including news and live scoring, are available at the event website, https://www.worldcurling.org/wjcc2019 As well, selected games will be streamed live on the World Curling Federation’s Youtube channel, https://www.worldcurling.org/wjcc2019/live-stream