Canada’s Tyler Tardi needed only six ends to shut down Italy’s Luca Rizzolli 10-3 and capture his third win at the 2019 World Junior Curling Championships on Tuesday afternoon in Liverpool, N.S. 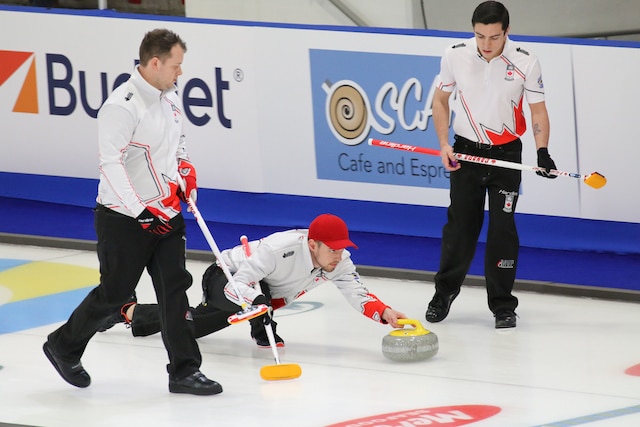 Tardi and his crew of third Sterling Middleton, second Matt Hall, lead Alex Horvath, alternate Rylan Kleiter and coach Paul Tardi showed no lingering effects of a tough extra-end loss to Scotland on Monday night and they controlled the game against Italy from the start in a solid rebound effort. “It’s pretty big for us to come back after a game like that (against Scotland),” Tardi said minutes after drawing for five and seal the win. “Last night we played a really great team and hats off to them for playing so well and coming out with a win there. We had a good chat to figure out all the problems we had last night and we fixed it all today and I hope we can keep that up moving forward.” The Team Canada skip says the team feels the support of Canadian fans every time they step on the ice. “It’s really cool to have fans behind our back, ever draw, every shot. We know they’re supporting us no matter what through the thick and thin and it’s a lot of fun out here,” he said. Team Canada’s Selena Sturmay, third Abby Marks, second Kate Goodhelpsen, lead Paige Papley, alternate Karlee Burgess and coach Amanda-Dawn St. Laurent lost their morning game against Sweden’s Tova Sundberg 9-3 and will be back on the ice at 6 p.m. ET to face South Korea’s Minji Kim (3-1). (This game will be streamed on World Curling Federation’s Youtube channel.) On Wednesday, the men return to the ice for games against China (8 a.m. ET) and Germany (6 pm. ET). The Canadian women will face Switzerland’s (1 p.m. ET) and this game will be broadcast on the World Curling Federation’s Youtube channel. Event information, including news and live scoring, are available at the event website, https://www.worldcurling.org/wjcc2019 As well, selected games will be streamed live on the World Curling Federation’s Youtube channel, https://www.worldcurling.org/wjcc2019/live-stream