Streaking Manitoba knocks Ontario from ranks of unbeaten at Scotties

SYDNEY, N.S. — If we’ve learned nothing else at the 2019 Scotties Tournament of Hearts, we can say with certainty that Tracy Fleury and Team Manitoba are not so strong starters, but superb finishers. 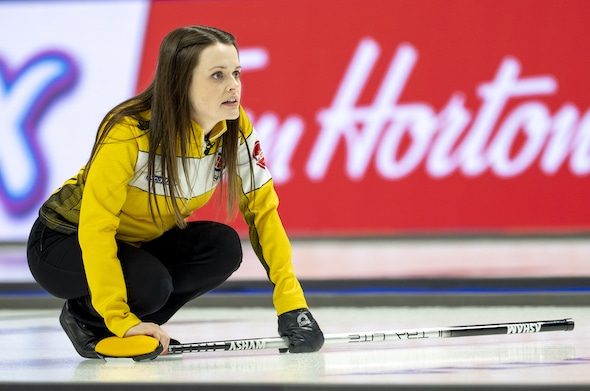 Tracy Fleury and Team Manitoba are on a three-game win streak at the 2019 Scotties Tournament of Hearts. (Photo, Curling Canada/Andrew Klaver)

It was the third straight victory for the Manitobans, who opened the 2019 Canadian Women’s Curling Championship with a pair of losses.

It wasn’t looking so promising early against Ontario; after Manitoba took one in the first end, Homan and Co. scored three in the second and stole one more in the third — normally a safe lead in the hands of the three-time Scotties champs.

But Manitoba had other plans.

“We just didn’t give up,” said Fleury. “We got down early, but we just kept setting up the ends well and putting some pressure on them. We had a talk about not needing to get it all back at once; just kind of chip away at it, and I think we did a good job of that. That steal hurt, for sure, to go down 4-1, but we just said, ‘Let’s get two and climb our way back.’ ”

They did exactly that — a deuce in the fourth end was followed by stolen singles in the sixth, eighth and ninth ends, and Ontario couldn’t manufacture the game-tying deuce in the 10th.

Comebacks are always fun, said Fleury, but even more fun when put together against a team considered among the favourites to win Sunday’s gold-medal game.

“Oh, yeah — they’re one of the best teams in the world, so when you get down early against them, it’s scary because they’re such good hitters,” said Fleury. “We had to be sharp and make sure we were getting our rocks in really good places.”

The top four teams in each eight-team round-robin pool will move onto the Championship Pool, and Manitoba now finds itself tied for third place with two other 3-2 teams — Northern Ontario’s Krista McCarville (Thunder Bay) and B.C.’s Sarah Wark (Abbotsford).

“It’s still a little bit scary with the two losses,” admitted Fleury. “But we’re happy to have won three in a row and we hope to keep that momentum going into our next two games.”

At the top of Pool A is Alberta’s Chelsea Carey (Calgary), who clinched her team a Championship Pool berth with a 10-5 win over Nunavut’s Jenine Bodner (1-4; Iqaluit).

“You want to be in that Championship Pool,” said Carey. “If you’re coming here from Alberta and not making the Championship Pool, I don’t think I’d go back. I’d be moving here to Sydney,” she added with a laugh.

Old-timers may remember her dad (and coach) Dan Carey uttering a similar quote prior to the 1992 Brier in Regina, as Manitoba men’s teams were in a long dry-spell, missing the playoffs at seven straight Briers. Not long after giving that fateful interview, Carey (the Manitoba vice-skip) was joining skip Vic Peters on top of the podium and hoisting the Brier trophy in Regina.

In other Tuesday morning games, Northern Ontario scored back-to-back deuces in the eighth and ninth ends en route to an 8-7 extra-end win over B.C.; and Nova Scotia’s Jill Brothers (1-4; Halifax) picked up her first win, a 7-4 triumph over Quebec’s Gabrielle Lavoie (0-5; Saint-Romuald).