Selena Sturmay will need a strong closing game on Friday – and a little help from the rest of the women’s field – before she can be sure of nailing down a playoff berth at the 2019 World Juniors Curling Championship after losing 8-7 in an extra end to China’s Yu Han on Thursday evening in Liverpool, N.S. 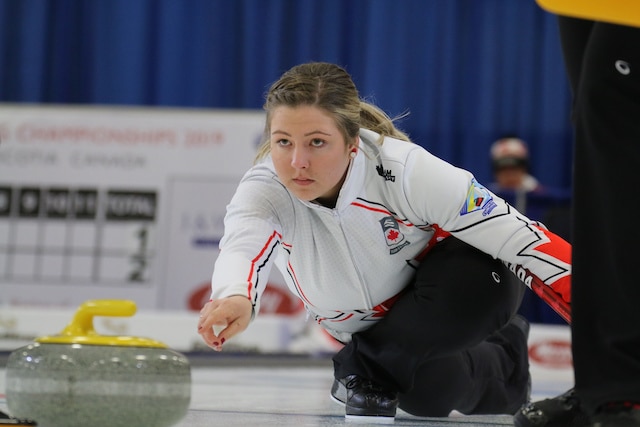 Sturmay and her team of third Abby Marks, second Kate Goodhelpsen, lead Paige Papley, alternate Karlee Burgess and coach Amanda-Dawn St. Laurent had their hands full against Han, who came into the game with a 6-1 record at the top of the women’s standings. It was a see-saw affair in which neither team took complete control. Canada was able to score three in the seventh to take the lead, but China responded with a single and, after that, a steal. In the extra end, Sturmay, without hammer, just couldn’t find draw weight, and China scored their single for the win and a spot in the playoffs. “It’s a bit of a tough game (to lose),” said coach Amanda-Dawn St. Laurent. “You know, we’ll go back, we’ll talk about the game and what happened and how we can make it better for tomorrow because we’re still not out of it. We still have an opportunity. We’ve just got to go out there in the next game and make some more curling shots.” Earlier in the day, Canada cruised to an 8-2 win over Norway’s Maia Ramsfjell, and the team brought in alternate Karlee Burgess, a Nova Scotia provincial champion as well as Canadian and former World champion, to play one end in front of the home crowd. 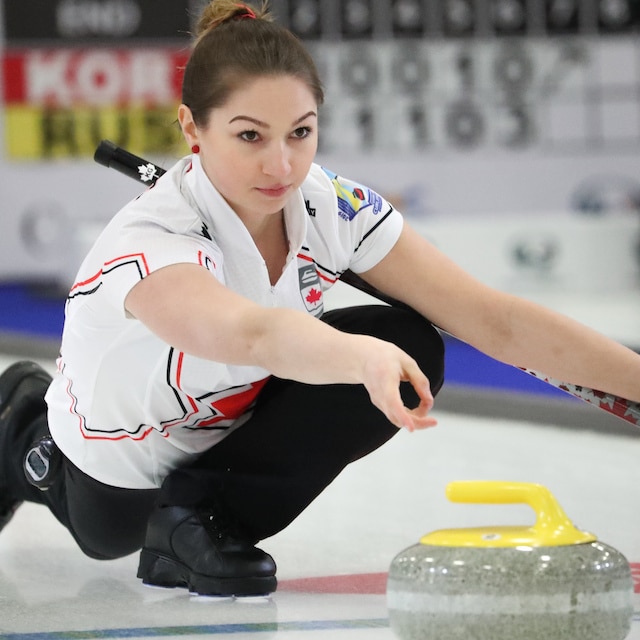 “It was only for two shots,” Burgess said afterword, with a laugh. “But the opportunity to play is great. I’m always grateful to wear the Maple Leaf. The girls have been (playing well) all week so I wasn’t really expecting to go in this week, but it’s always great to get that extra bonus and throw a few rocks.” “Support is the word I’d use,” said the Nova Scotia provincial champion about her contribution to the team in her role as alternate. “Amanda and Kate have also been to a world championship so it’s good to have them there also. So support, and anything they need I’m always here, but they know how to play the game.” Canada will need to have their best game on Friday against Russia (12:30 p.m. ET). With China and Switzerland already qualified for playoffs, the race for the final two spots will be left to Russia, Canada, Korea and Sweden. The Canada-Russia game will be broadcast on the World Curling Federation Youtube channel In men’s action, Tyler Tardi qualified for the playoffs on Thursday afternoon with a 9-5 win over Sweden. He and his team of third Sterling Middleton, second Matt Hall, lead Alex Horvath, alternate Rylan Kleiter and coach Paul Tardi will play their final game of the round robin on Friday morning (8 a.m. ET) against New Zealand’s Matthew Neilson. The semifinals will take place on Friday at 6:30 p.m. ET. One of the men’s semifinals will be broadcast on the World Curling Federation Youtube channel (teams TBA). Men’s bronze- and gold-medal games will be on the ice at 9 a.m. ET on Saturday, followed by the women’s championship games at 2 p.m. ET. Both gold-medal games will be broadcast on the World Curling Federation’s Youtube channel. Event information, including news and live scoring, are available at the event website, https://www.worldcurling.org/wjcc2019 As well, selected games will be streamed live on the World Curling Federation’s Youtube channel, https://www.worldcurling.org/wjcc2019/live-stream