SYDNEY, N.S. – Jennifer Jones took one more step towards being the complete Queen of Hearts Friday, winning her record-breaking 141st game in the Scotties Tournament of Hearts as a skip. Her namesake, Colleen Jones held the record of 140 set over her illustrious career. Jennifer Jones and Team Canada scored a 5-4 win over Sarah Wark and Team British Columbia in the final draw of the Championship Pool of the Scotties. “To be honest we kind of forgot about it, but at the end (second) Jocelyn (Peterman) mentioned,” the 44-year-old Jones said. “It was a hugely disappointing week, but it feels pretty good to have that record.” Jones, who a day earlier had been named Canada’s all-time greatest skip by a TSN panel, left the Centre 200 ice surface applauding the fans who were applauding her. 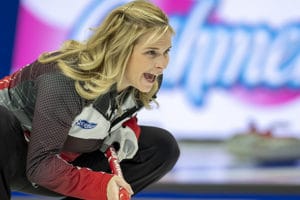 “How many people get to play in front of a great crowd and how many people get people to applaud for our performance?” she said. “I feel very fortunate and lucky to be in that situation. So I wanted to thank them for making our dreams come true, which is what they do every time they come and put a bum in that seat.” Colleen Jones and her Nova Scotia team were the most dominant team in Canadian curling at the turn of the decade. Colleen a record six Scotties titles including four in a row, 2000 through 2004. She is the youngest skip to win a Scotties, at age 22, and has two world championships (2001, ’04) to her credit. She won her last Scotties in 2004 at the age of 44 and a year later Jennifer began her reign. Jennifer and her Winnipeg-based team of third Kaitlyn Lawes, second Jill Officer (who is taking a break this year) and lead Dawn McEwen had dominated the Canadian game since then, with Jennifer and Officer matching Colleen’s six Scotties titles and two world championships. The team also won the 2014 Olympic gold medal. “It was inevitable,” Colleen said of Jennifer passing her games-won record. “There was a time I thought the record might stand forever, and then along came Jennifer and she just kept piling up the wins.” While the games-won mark has been passed, Colleen said she has always regarded the six Scotties championships accomplishment she shared with Jennifer as the more meaningful record. “Championships are so hard to win, so to win seven would be an amazing accomplishment. Jennifer looks like she can continue winning for some time.” Even though she won’t get a chance at a seventh title this year after missing the playoffs earlier in the day, Jennifer said she’s likely not through chasing that record. “You never know. It’s hard to get here, but that’s the plan.”