BRANDON, Man. – Brendan Bottcher of Edmonton scored three deuces en route to an 8-4 win over John Epping of Toronto to win the wild-card game and advance into the main draw of the 2019 Tim Hortons Brier, presented by AGI, at Westoba Place. 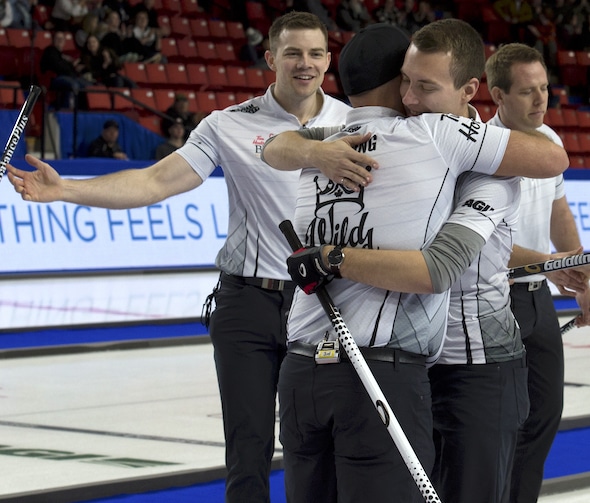 In a rematch of last year’s Tim Hortons Brier semifinal also won by Bottcher, the Alberta foursome made more key shots and had fewer misses to earn itself another shot at the Brier championship that it lost in last year’s final to Team Canada’s Brad Gushue. The game was tight until the eighth when Bottcher scored two and then stole one in nine when a desperation try for a triple on Epping’s final stone left Bottcher the key single. But both skips agreed the pivotal ends were early, in the third when Bottcher scored his first deuce before stealing one in the fourth. “The deuce in the third was huge,” said Bottcher. “The score in the fourth was nice just because now we were scoring in the even ends again, but the deuce was great just to calm us down, we’re in a good place, just manage the scoreboard, we’re not chasing. Sometimes in games like this scoring your first point is big because you can relax a bit.” “We got the steal in two and I thought would take some of the momentum away from them,” said a disappointed Epping. “A couple of misses (in three) gave them a deuce. We played a great fourth end, set ourselves up for a deuce but turned around they ended up stealing. That was a big turning point for us.” Bottcher said the key for his team was just staying relaxed, especially after giving up the early steal. “We off to a little slow start, had the hammer but gave up a steal. But we stuck with it, stayed calm and that really paid off for us. I really felt at peace with the game today, either way I was going to be okay with it.”

Epping had a single in five and two in seven, but Bottcher scored two in the sixth to maintain control. “We just didn’t play well enough today,” said Epping. “I missed a couple of shots wide early … and they made some great ones, great saves early to keep themselves in the game. It sucks.” The two teams got into the Wild Card game as the top-ranking Canadian Team Ranking System squads that had failed to win their provincial titles. Bottcher, third Darren Moulding, second Brad Thiessen and lead Karrick Martin failed to reach the final of the Alberta playdowns. Epping, third Mathew Camm, second Brent Laing, lead Craig Savill and coach Jim Wilson, fell short of advancing out of Ontario, losing three times in the playdowns to eventual Tim Hortons Brier representative Scott McDonald. Bottcher scored a deuce in the third, stole one in four and added deuces in the sixth and eighth ends to offset an Epping steal of one in the second, a single in the fifth and two in the seventh. Gushue, here as Team Canada for a second straight year, begins his quest for a record-tying third consecutive Brier against McDonald in Saturday’s 7 p.m. draw. The first draw is at 2 p.m. The 2019 Tim Hortons Brier continues with draws Saturday at 2 p.m. and 7 p.m. (all times CST). Live scoring, standings and statistics for the 2019 Tim Hortons Brier are available at www.curling.ca/scoreboard/ TSN and RDS2 (streamed on ESPN3 in the United States) will provide complete coverage of the 2019 Tim Hortons Brier. CLICK HERE for the complete schedule. For ticket information for the 2019 Tim Hortons Brier, go to www.curling.ca/2019brier/tickets. This story will be available in French as soon as possible at www.curling.ca/2019brier/?lang=fr