BRANDON, Man. – Mike McEwen wanted to take his time getting into his early-morning game Sunday, but gladly took advantage of early steal opportunities to kickstart Team Manitoba to an 8-3 win over Martin Crête of Team Quebec at the Tim Hortons Brier, presented by AGI. 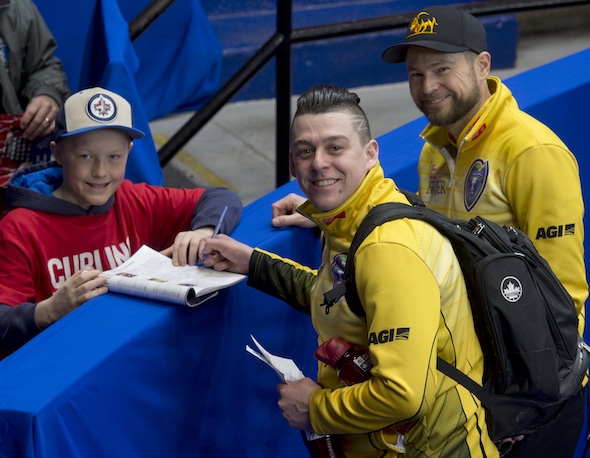 McEwen and his Team Manitoba mates (2-0, West St. Paul) stole singles in the first two ends and stole two in the seventh by putting constant pressure on Quebec (1-1, Saint-Romuald). “After coming off a real big, kind of emotional game yesterday my thoughts were to just take our time with the game,” McEwen said. “But we definitely got some opportunities early that we capitalized on. But by no means were we wanting to jump into the fray right away.” In the first McEwen, third Reid Carruthers, second Derek Samagalski, lead Colin Hodgson, alternate Matt Wozniak and coach Rob Meakin were sitting five before Crête’s last rock cut them down to a steal of one. In the second Manitoba had two buried inside the four-foot and forced Crête into another hit to cut that to one. “We played a not very solid game, had problems the first ends with the curl,” admitted Crête. “It happens. Mike’s team played very well, they made a lot of shots and deserved to win.” Crête, third Philippe Lemay, second Éric Sylvain, lead Philippe Ménard, alternate Philippe Brassard and coach Robert Ménard got one back in the third but were never able to mount much pressure on Manitoba. “A good effort from the guys,” said McEwen. “Basically it came down to we managed to put a lot of pressure on Martin on his last rocks and he had a couple of draws that he didn’t execute on. It was a game that could have been a lot tighter, but he had some tough, tough draws and he missed one or two of them.” “That was a very good start even though it was singles, usually it’s an uphll battle when you start without hammer.” Brendan Bottcher and Team Wild Card (1-1, Edmonton) responded to giving up three in the third end to John Likely and Team PEI (1-1, Charlottetown) by scoring four in the fourth and stealing four more in the fifth en route to a 14-4 win.

“It was really two shots at the end of that end, it didn’t feel like we played a bad end,” Bottcher said of the third. “It was good,” he said of his team’s response. “We needed that to get on a bit of a roll, make a bunch of shots those last few ends and just get nice and settled in here. We’ve been on a bit of a roller-coaster here, the high on Friday, a low yesterday (a loss to Northern Ontario) and now we’re bouncing back. I think we’re getting comfortable and getting more used to what the ice will be like for the rest of the week and that’s all I can ask for.” Brad Jacobs and Team Northern Ontario (2-0, Sault Ste. Marie) scored two in the first end, stole one in the second and got three in the fifth to roll past Andrew Symonds and Team Newfoundland and Labrador (0-2, St. John’s) 8-2. Kirk Muyres and Team Saskatchewan (1-1, Saskatoon) jumped into a 5-1 lead after three ends and then hung on to beat Jon Solberg and Team Yukon (0-2, Whitehorse) 6-5. The 2019 Tim Hortons Brier continues with draws today at 2 p.m. and 7 p.m. (all times CST). Live scoring, standings and statistics for the 2019 Tim Hortons Brier are available at www.curling.ca/scoreboard/ TSN and RDS2 (streamed on ESPN3 in the United States) will provide complete coverage of the 2019 Tim Hortons Brier. CLICK HERE for the complete schedule. For ticket information for the 2019 Tim Hortons Brier, go to www.curling.ca/2019brier/tickets. This story will be available in French as soon as possible at www.curling.ca/2019brier/?lang=fr