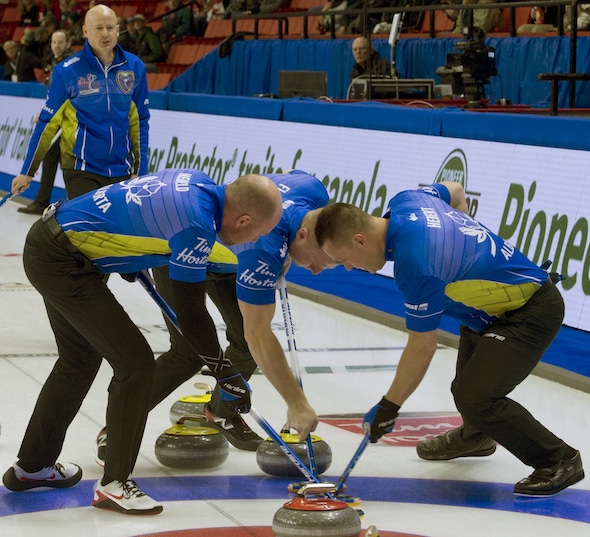 Team Alberta was pushed hard by New Brunswick but pulled out the win on Monday morning. (Photo, Curling Canada/Michael Burns)

The three-time Tim Hortons Brier champion gave up a steal of three in the fourth end when his last-rock draw wrecked in the 12-foot to fall behind 5-2. But the veteran Koe, with third B.J. Neufeld, second Colton Flasch, lead Ben Hebert, alternate Tom Appelman and coach John Dunn, didn’t panic and eventually turned the game around. “It definitely was not pretty,” understated Koe. “Struggled a bit with draw weight and some lines, the steal of three was a disaster.” His draw, he said, had the right weight but the wrong line. After an exchange of singles the Alberta crew began their comeback with three in seventh on a perfect tap-back by Koe, added two in the ninth and put an exclamation mark on its comeback with a steal of four in the 10th. “We did a good job hanging in there and making him have some tough shots at the end,” said Koe, who said he remained confident through the game because of the five-rock Free Guard Zone rule. “Then you try to make him make tough shots. They’re a veteran team but hopefully some nerves set in (when they realize) they have a chance to win… and we played a great last three, four ends.”