BRANDON, Man. – Terry Odishaw made an 11th-end hit and stick for a 9-8 win over Team Ontario to give Team New Brunswick just its second win in the Tim Hortons Brier, presented by AGI, but it was enough to keep alive its hopes of advancing into the Championship Pool. 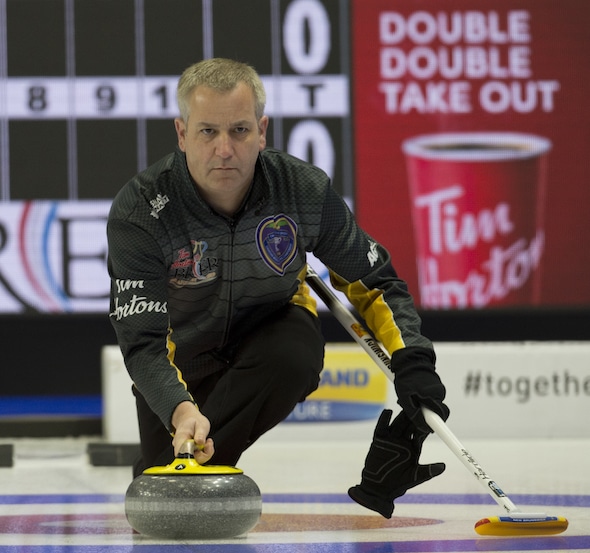 “I used to get butterflies when you were throwing that type of shot; now you’re just afraid to miss,” said Odishaw, who is in his third Tim Hortons Brier but his first since 2012. “There’s a big difference, I don’t know how to describe it. The first time I had to throw a big draw for a big win, I think that was in ’98 to go to (the Brier in) Winnipeg; I could feel my heart pumping in my chest. I guess the experience comes in as you learn to calm that down.” Odishaw and his Team New Brunswick (2-4, Moncton) mates, third Jordan Pinder, second Marc Lecocq, lead Grant Odishaw and alternate Jamie Brannen, gave up two in the first end to Scott McDonald and Team Ontario (3-3, Kingston) but scored three in the second to grab control. “That put us in a position where we now had control of the hammer,” said Terry Odishaw. “That’s pretty much what you try to do when you start out without the hammer.” But they gave up a steal of one in the 10th and needed Odishaw’s last rock to win in the extra end. “I was uncomfortable that I was in the 11th end, but it’s just another shot.” To advance into a tiebreaker, New Brunswick must win its final round-robin game this evening and hope that either Ontario or Nova Scotia loses. Odishaw will play Jamie Koe and Team Northwest Territories (1-5, Yellowknife), who lost 9-5 to Jim Cotter and Team British Columbia (4-2, Vernon) in their morning draw. In the other Draw 12 games, Brad Gushue and Team Canada (5-1, St. John’s, NL) beat Stuart Thompson and Team Nova Scotia (3-3, Dartmouth) 9-2 and Kevin Koe and Team Alberta (6-0) rolled by David St. Louis and Team Nunavut (0-6, Iqaluit) 13-2.

The top four teams in the pool after tonight’s final round-robin draw advance to the Championship Pool. Should two rounds of tiebreakers be necessary, one would be played late Wednesday night and the second would go Thursday morning. It was a tough loss for McDonald, third Jonathan Beuk, second Wesley Forget, lead Scott Chadwick, alternate Jeff Grant and coach Sean Turriff, who could have taken a big step towards avoiding a tiebreaker scenario with a victory. “I wasn’t our sharpest effort .. we left a lot of shots on the ice and you hate to do that at this point of the week when the wins are so important,” said McDonald. “We’ll have a team meeting and come out sharp tonight.” The 2019 Tim Hortons Brier continues with draws today at 2 p.m. and 7 p.m. (all times CST). Live scoring, standings and statistics for the 2019 Tim Hortons Brier are available at www.curling.ca/scoreboard/ TSN and RDS2 (streamed on ESPN3 in the United States) will provide complete coverage of the 2019 Tim Hortons Brier. CLICK HERE for the complete schedule. For ticket information for the 2019 Tim Hortons Brier, go to www.curling.ca/2019brier/tickets. This story will be available in French as soon as possible at www.curling.ca/2019brier/?lang=fr