BRANDON, Man. – Kevin Koe and Team Alberta, along with Brad Jacobs and Team Northern Ontario remained unbeaten Thursday as the 2019 Tim Hortons Brier, presented by AGI, moved into the Championship Pool at Westoba Place. The teams achieved their eighth-straight victories in vastly different ways. Koe, a three-time Tim Hortons Brier champion, and his team from Calgary executed another of those “typical Kevin Koe” shots with final stone in the tenth end to score three and take a 7-6 win over Brendan Bottcher and Team Wild Card (6-2, Edmonton). 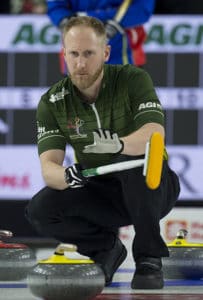 It was business as usual for Brad Jacobs and his team from Northern Ontario. They dismantled British Columbia’s Jim Cotter 11-5. (Photo, Curling Canada/Michael Burns)

Bottcher had thrown a nearly perfect freeze to three Alberta stones, but Koe threw enough weight and hit the stone in an ideal spot to kick it out and score the three. “I wasn’t positive it could go without touching (our stone), obviously we hit it perfect,” Koe said. “That’s one of my best shots, I’m a good hitter, on the out-turn side especially and if I’m going to have a shot to win … I want it to be there. I’ve thrown them good all week, so I had confidence in at least hitting it where we wanted to. Fortunately for us it ended up good enough.” Koe, with third B.J. Neufeld, second Colton Flasch, lead Ben Hebert, alternate Ted Appelman and coach John Dunn, had a struggle against Bottcher. The teams traded deuces in the second and third ends, Bottcher got two in the eighth and then stole one in nine when Koe’s last rock hit-and-stick rolled too far. That set up the tenth end heroics. Jacobs, the 2013 Tim Hortons Brier champion, followed the same script he has all week – get the hammer, score at least two and roll to win. This time the Northern Ontario (8-0, Sault Ste. Marie) crew scored two in the first end and five in the third to beat Jim Cotter and Team British Columbia (4-4, Vernon) 11-5. “We got off to a good start, a nice early deuce,” explained Jacobs. “Gave one back (in the second end) but got fortunate when we had an easy nose hit for five and able to cruise to pretty easy win from there.” Jacobs, third Ryan Fry, second E.J. Harnden, lead Ryan Harnden, alternate Lee Toner and coach Adam Kingsbury, didn’t give Cotter many chances after the second end. In the other afternoon draw action, Brad Gushue made nearly perfect draws to score deuces in the fifth and ninth ends to lead Team Canada (7-1, St. John’s, N.L.) to a 6-3 win over Mike McEwen and Team Manitoba (4-4, West St. Paul); and Scott McDonald and Team Ontario (5-3, Kingston) scored three in the tenth end to beat Kirk Muyres and Team Saskatchewan (4-4, Saskatoon) 7-4. The 2019 Tim Hortons Brier continues with tonight’s draw 7 p.m.  CST. Live scoring, standings and statistics for the 2019 Tim Hortons Brier are available at www.curling.ca/scoreboard/ TSN and RDS2 (streamed on ESPN3 in the United States) will provide complete coverage of the 2019 Tim Hortons Brier. CLICK HERE for the complete schedule. For ticket information for the 2019 Tim Hortons Brier, go to www.curling.ca/2019brier/tickets. This story will be available in French as soon as possible at www.curling.ca/2019brier/?lang=fr