The University of Alberta’s Karsten Sturmay and Kristen Streifel finished off the round robin ready to lead their teams into the playoff round at the 2019 Winter Universiade in Krasnoyarsk, Russia. 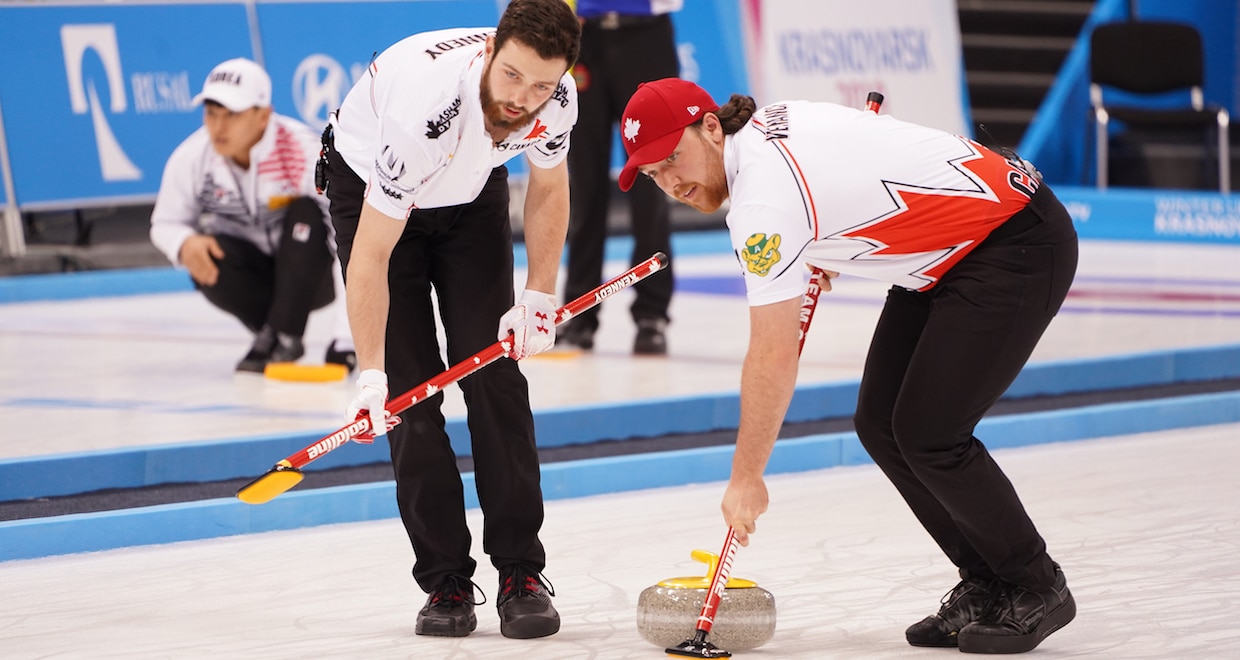 Sturmay and his team of third Tristan Steinke, second Chris Kennedy, lead Glenn Venance and coach Rob Krepps needed at least one more win to clinch their spot in the qualification round, and they got that done with a solid 7-4 win over China’s Chenwei Hu on Thursday night. “It was really a game well played by our team from start to finish,” said Sturmay. “We got the lead early and played some good defence. The second deuce we scored was really big and that was definitely a turning point and gave us control of the game.” The final round-robin game against Norway’s Magnus Ramsfjell was a tune-up for the playoffs, as both teams had already qualified, and it was a tight battle. Norway stole a single in the sixth to go ahead 4-3, but Canada answered right back with a three-ender in seven. Another steal in nine put Norway up 7-6 but Sturmay and crew came through with another three-ender for the 9-7 victory. “It feels amazing making that last shot,” said Sturmay. “That’s why you play curling, for those big moments. The game is hanging in the balance and to not only throw that shot but to celebrate with your team. We are thrilled to make the semis and fortunate to earn the bye.” With the win, Canada finishes in second place with a 6-3 record and will go directly through to the men’s semifinal on Saturday at 4 a.m. ET. Streifel and her team of vice-skip Danielle Schmiemann, second Selena Sturmay, lead Jesse Iles, alternate Paige Papley and coach Garry Coderre came into the final day of round-robin action with their playoff spot already sealed up, but that didn’t stop them from hammering Korea’s Minji Kim 9-1 in their final game of the preliminary round. “Mission one accomplished,” said Streifel. “We came out firing on all cylinders today knowing that we had to bring our A game against Korea. It feels great to finish off the round robin with such a strong game. Now we just have to keep the momentum rolling.” Canada stole five ends in a game in a dominant performance by the University of Alberta champions. “I am so proud of how well the girls played,” said the skip. “We were robotic out there. Heading into the playoffs wearing the Maple Leaf proud on our backs feels pretty good right about now.” Canada finished in third place with a 7-2 record and will play sixth-place Great Britain’s Sophie Jackson (5-4) in the qualification round (Friday 9 p.m. ET). 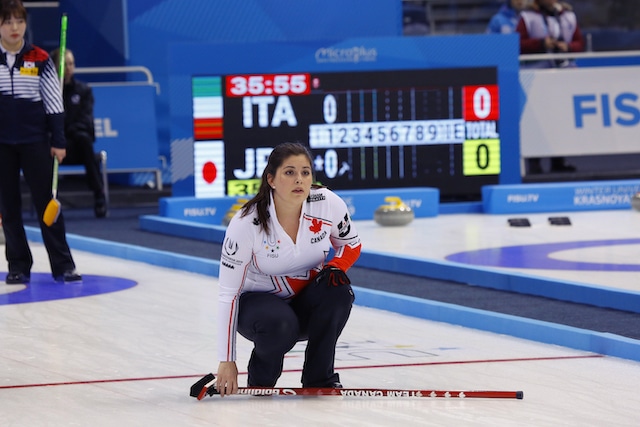 The top six teams after the conclusion of round-robin play make the playoffs, with the first- and second-place teams getting byes into the semifinals March 9 at 4 a.m. ET; the third-place team takes on the sixth-place team, while the fourth- and fifth-place teams play on March 8 at 9 p.m. ET, with the winners going to the semifinals. The gold- and bronze-medal games are set for March 10 at 3 a.m. ET. Live scoring will be available on the official event website, https://krsk2019.ru/en Additionally, keep checking curling.ca for stories throughout the competition. There will be live streaming of the 2019 Winter Universiade, including selected curling matches, at www.fisu.tv/ as well as FISU’s Youtube channel. For information on the Canadian athletes competing in all sports at the Winter Universiade, go tousports.ca/en/international/universiades/winter-2019