Karsten Sturmay and his University of Alberta team of third Tristan Steinke, second Chris Kennedy, lead Glenn Venance and coach Rob Krepps are bringing home a silver medal after a 6-5 loss to Norway’s Magnus Ramsfjell in the final of the men’s curling event at the 2019 Winter Universiade in Krasnoyarsk, Russia on Sunday. “It was a really close game,” said Sturmay. “We have a ton of respect for those guys.” 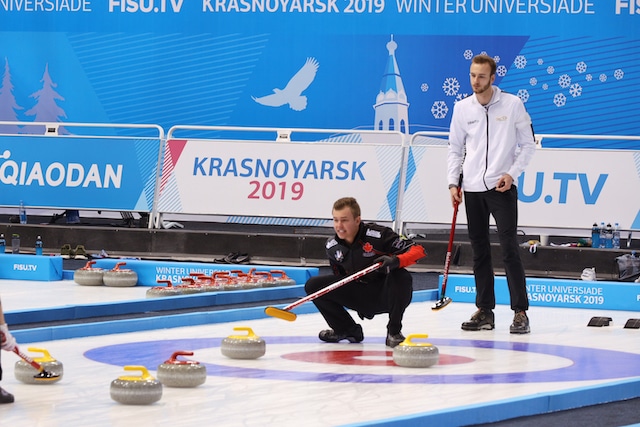 Both teams struggled to get rocks in position in the early ends and traded singles as they tried to mount an effective offence. Tied 3-3 in the eighth, Sturmay’s final freeze attempt just rolled wide and Ramsfjell was able to tap it back for a score of two and a 5-3 lead. Canada bounced back with a deuce in nine to tie it up yet again. Needing to steal in ten, Sturmay threw up the centre guards and tucked one rock around, then played guard after guard as Norway peeled. With his last rock, Sturmay drew to the front of the eight-foot, forcing Ramsfjell to make a perfect draw to the four-foot for the 6-5 win and a gold medal for Norway. “We played a really good match ourselves, it just came down to one or two shots here and there,” Sturmay said. “But at the end of the day it really could have gone either way, so we have lots to hold our heads high about.” “It’s been the experience of a lifetime,” added the Canadian skip, who earned a trip to the Universiade after winning the Canadian university title last March in Leduc. “To be part of this event and especially a multi-sport event as Team Canada has been really inspirational.” In the women’s competition, Kristen Streifel and her University of Alberta team of vice-skip Danielle Schmiemann, second Selena Sturmay, lead Jesse Iles, alternate Paige Papley and coach Garry Coderre were eliminated from playoff contention after a 6-4 loss to United Kingdom’s Sophie Jackson. The United Kingdom’s Ross Whyte won the bronze medal, defeating Switzerland’s Yannick Schwaller, 10-5. In the women’s medal games, Sweden’s Isabella Wranå will face South Korea’s Minji Kim for gold, while Jackson will play Russia’s Maria Komarova for bronze (Sunday, 3 a.m. ET).