Day One at the 2019 CCAA Curling Canada Championships in Fredericton 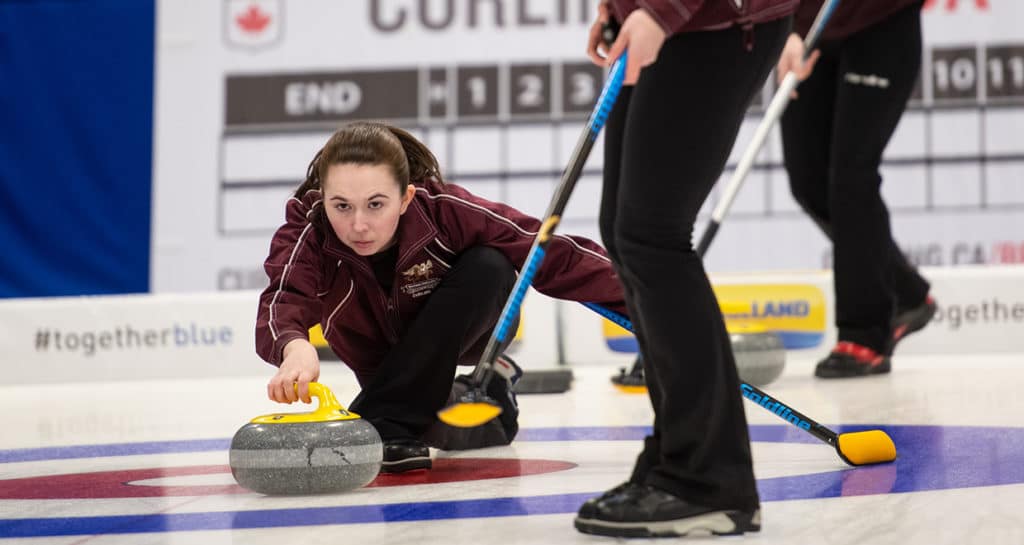 The women’s competition began with three one-sided matches and a very tight game between the Holland Hurricanes (ACAA) and Augustana Vikings (ACAC). The Hurricanes and Vikings see-saw battle had both teams owning the lead at different points. As the end neared, Augustana tied the match in the eighth and went ahead 4-3 in the ninth end. However, Holland tied it back up 4-4 with their last shot of the 10th end, before Augustana won it with the last stone in the 11th.

The MacEwan Griffins (ACAC) led 5-0 after two ends and never looked back in an 11-4 win over the Douglas College Royals (PACWEST). Skip Ashton Simard led the way, curling an 83% game and the Griffins curled 79% as a team in the win. Skip Emily Clark (89%) led the NAIT Ooks (ACAC) to a four-point lead in the first two ends and that proved enough as the Ooks defeated the Fleming Knights (OCAA) 10-2. The Humber Hawks (OCAA) broke their game wide open with four in the fifth end to defeat

The MacEwan Griffins and Augustana Vikings ended day one undefeated following their victories in the second Draw. The Griffins secured their 2-0 record with a 10-5 win over Humber College (1-1). The Griffins took a 5-1 lead after four ends and held off the Hawks to put themselves in a good

position heading into action on Saturday. Brittany Bison curled 75% for the Griffins while Aston

Simard had another strong outing for the Hawks curling at 81%.

The Vikings second match was another tough contest, this time against their ACAC North rivals the NAIT Ooks. Augustana maintained a slight edge throughout, and eventually broke open the close game with two in the ninth to win 9-6 over NAIT in a high scoring affair.

Holland moved into the win column by holding onto a narrow 6-5 victory over Fleming. The Knights made it interesting, scoring two in the ninth end and one in the 10th, but it was too little too late. Fanshawe also rebounded with a decisive 12-3 victory over Douglas. The 2018 women’s defending champions wasted little time getting back into this year’s race.

Draw One on the men’s side was highlighted by a couple of come from behind victories. The NAIT Ooks (ACAC), prevailed 5-4, over the Humber Hawks (OCAA) after squaring the game in the ninth end and winning it with a steal in the 10th. John Ritchie curled at 75% for the Ooks while Brad Lumby had a strong effort for Humber at 84%.

The Lakeland Rustlers (ACAC) earned the other comeback victory in the first round. The Rustlers scored two points in the seventh and another two in the 10th to defeat the Fanshawe Falcons (OCAA) 5-3. Jamie Mason curled 73% for the Rustlers and skip Charlie Richard checked in at 75% for the Falcons.

An all-ACAC tilt saw the Concordia Thunder prevail in their back and forth match with the Olds Broncos. The Thunder claimed an 8-5 win in a game that featured several lead changes. Cody Holowaychuk curled at 78% for the Thunder while Simon Pitman curled 75% for the Broncos. Sault Skip Nick Servant curled at 93% to lead the Cougars (OCAA) over their northern Ontario colleagues the Confederation Thunderhawks (OCAA).

The men’s second round of matches continued the trend from Draw One, with several back and forth contests. The four winning teams from the morning all squared off, leaving only two teams undefeated at the end of day one. Sault and Concordia traded points throughout the game with neither team wanting to concede their first defeat. The lead changed hands three times before Concordia scored singles in the seventh and eighth ends and a pair in the ninth to win 8-4.

NAIT and Lakeland were in a defensive battle into the sixth end when NAIT scored two then added another in the seventh to extend the lead to 6-2. However, Lakeland did not quit, posting three in the eighth to bring it to within one at 6-5. NAIT settled down to score one in the ninth and close out the game 7-5.

Confederation were looking to bounce back from their first-round loss, but Olds took control of the match in the fifth end. The Broncos added one more in the sixth and put the game on ice with two in the eighth to defeat Confederation 7-3. The final match of the day was a defensive clinic between Humber and their OCAA rivals, Fanshawe. Both teams kept the sheet relatively clean into the late ends until Humber scored two in the sixth. Fanshawe responded with three in the eighth and one in the ninth to defeat the Hawks 6-4.

Standings After Day One