FREDERICTON (U SPORTS) – The Dalhousie Tigers sit atop both the men’s and women’s standings after two days of competition at the 2019 U SPORTS/Curling Canada Curling Championships, in Fredericton. 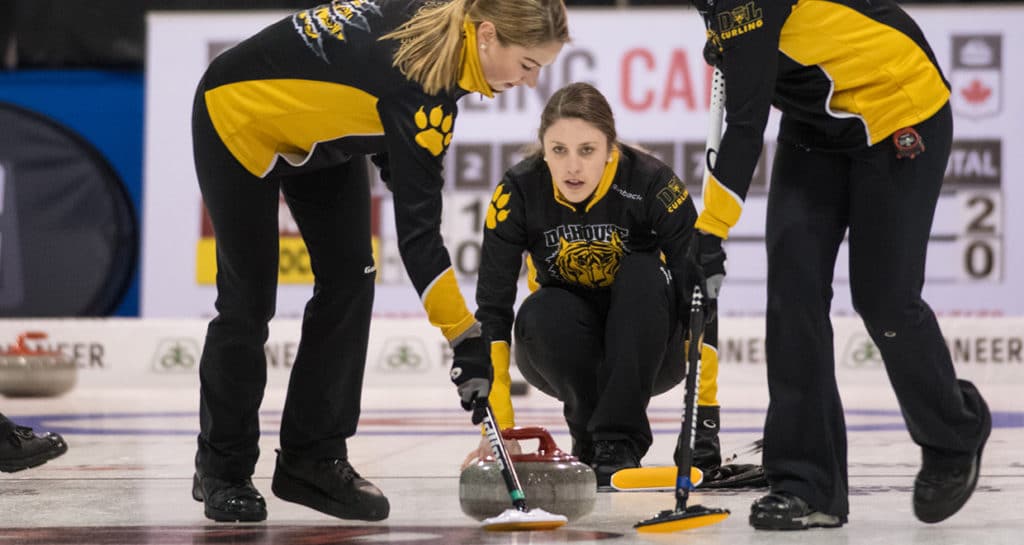 On the women’s side, Dal’s Kaitlyn Jones improved to 4-0 with wins over Mount Allison and Alberta on Saturday.

The Tigers men’s team, skipped by Matthew Manuel, is 3-1 after an afternoon win over Lethbridge and their first loss, in the evening draw, to Carleton.

In the opening draw of the day, Jones went to 3-0 with a 6-5 win over AUS rival Mount Allison.

“We feel pretty good,” said Jones. “We’ve got to be a little bit sharper, but overall, having that win on the board is helpful in the long run.”

The host UNB Reds dropped a 7-4 decision to Brock.

Laurentian handed the defending champion Alberta Pandas their first loss of the event. The Voyageurs scored two in the seventh end and stole another in the eighth on route to an 8-6 win.

And the Queen’s Gaels held on to beat Regina 7-6. That game saw the Cougars score in three consecutive ends.

“It’s always tough when the other team makes a great shot to take an end away from you,” said Gaels skip Mary Fay. “It feels really good to get that second win under our belts. There are so many great teams here, so you’ve got to take the wins when you can.”

In Saturday’s early afternoon draw, Manuel and the Tigers scored a 7-4 win over the Lethbridge Pronghorns. 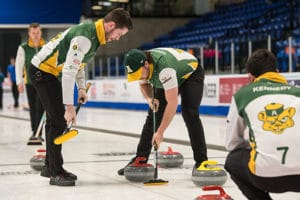 Alberta’s Karsten Sturmay improved to 2-1 after scratching out a 7-6 win over Brock.

“I’m really proud of the boys for grinding through and fighting until the end,” said Sturmay. “At a competition of this level, you can’t take any team lightly. Those guys are very good curlers, they’re quite accomplished in their own right, so I’m just happy that we made a couple of more shots than them and managed to come out with the win.”

UNB beat the Memorial Sea-Hawks 9-3. The host Reds scored four in the fourth end and added two more in the seventh.

And the Western Mustangs scored four in the opening end, before scoring two more in the fourth and stealing two in the fifth, in an 11-4 victory over Carleton.

In the women’s second draw of the day, Dalhousie remained unbeaten after a 5-3 win over Selena Sturmay’s defending champion Alberta Pandas rink.

Fay and Queen’s stole one in an extra end to beat Brock‘s Terri Weeks 5-4.

“It was a tough end, for sure,” said Fay. “They made a lot of great shots and were sitting really well, so we were just trying to fight with everything we had. We had a guard that we could come around. It was tough.”

UNB’s Justine Comeau picked up her first win, scoring two in the first and stealing two more in the sixth end to beat the Regina Cougars 8-3.

“Hopefully we can build on this,” said Comeau. “We played really well. I think we finally got a good handle on the ice. Everything just kind of came together.”

Laurentian scored four in the eighth end in their 10-4 win over Mount Allison.

In the day’s final draw, the Western Mustangs men improved to 3-1 with a 13-5 win over Lethbridge.

The Mustangs scored four in the first and three in the fifth.

“For the big ends, I found that our lead was putting the set-up rocks in the right spot,” said Western skip Ryan Thompson Brown. “They were trying to junk things up a bit, so we just kept peeling until we got our opportunity, then capitalized on it.”

Carleton’s Cameron Goodkey scored four in the sixth end in a 9-3 win over Dal – the Tigers’ first loss.

And the Memorial Sea-Hawks ran their record to 3-1 with a 8-5 victory over winless Brock.