Day Two at the 2019 CCAA Curling Canada Championships in Fredericton

Saturday’s early matches in then Men’s Draw were primarily one-sided affairs. The NAIT Ooks remained undefeated by scoring five in the third end and three in the fifth on their way to a 13-1 win over the Sault Cougars. NAIT was focused from the start, curling a championship best 85% as a team with JJ Crowder curling 100% and his teammates Trygg Jensen and Jonah Tobinski both curling at 88%. 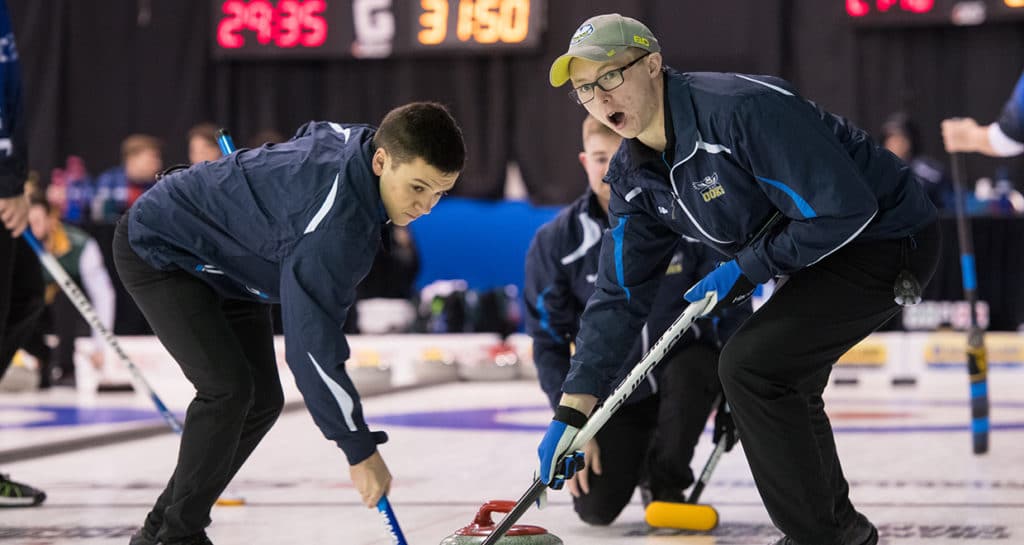 The Concordia Thunder also kept their perfect record alive with a 7-2 win over fellow ACAC members the Lakeland Rustlers. Evan Van Amsterdam led the way for Concordia at 88% while Jared Mason was effective for Lakeland curling at 86%.

In a battle of OCAA teams, the Confederation Thunderhawks and Humber Hawks were deadlocked at 3-3 through six ends. Backed by Benjamin Hughes (curling 94%), Humber scored five in the seventh and two in the eighth to finish the game at 10-3.  The Fanshawe Falcons raced out to a 3-0 lead in the first end and were never seriously by the Olds Broncos on their way to a 10-3 victory.

The Edmonton rinks, NAIT and Concordia, maintained their unblemished records and position atop the standings in the men’s fourth draw. NAIT’s victory came against the Olds Broncos with both teams exchanging a flurry of points early in the match. NAIT led 5-4 at the midway point before adding three more in the sixth on the way to a 9-6 win in the ninth.

The Concordia Thunder built a 4-1 lead over the Humber Hawks by scoring single points in four of the first five ends. Humber tied the game 4-4 with two in the sixth end and one in the seventh.

Concordia found their early game magic and finished string with two in both the eighth and ninth to wrap up an 8-4 victory.

The Fanshawe Falcons 8-3 win over the Sault Cougars was defined by their four points in the fourth end which gave them a 5-1 lead. The Cougars reduced the lead to 6-3 in the seventh end but Fanshawe closed out the game with two in the eighth.  The Lakeland Rustlers and Confederation Thunderhawks battled in a close contest that saw the Rustlers hold a slim 5-4 heading into the ninth end. However, Lakeland had an explosive four points in the 10th end to win the match 9-4. 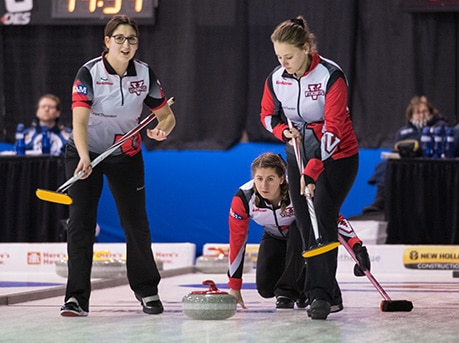 Draw 5 on Saturday morning featured the MacEwen Griffins (2-0) and Augustana Vikings (2-0) putting their undefeated records on the line against the NAIT Ooks and Humber Hawks respectively.

MacEwen and NAIT began cautiously but the match opened up when the Griffins struck for two in the fifth and one in the sixth to claim a 4-3 lead. The Ooks appeared in good shape after scoring two in the eighth, but the Griffins proved resilient and tied the game in the ninth. However, the Ooks answered right back, grabbing a single in the 10th to secure an entertaining 6-5 win. Emily Clark curled 81% for the Ooks and Erin Wells 74% for the Griffins.

In the other early matches, the Fanshawe Falcons defeated the Holland Hurricanes 8-5 and the Douglas Royals beat the Fleming Knights 14-7. Fanshawe lead 7-1 at the midway point, but Holland chipped away with single points in the sixth, seventh, eighth and ninth ends. Gabrielle McSloy’s outstanding 94% performance backed the Falcons to their eventual win. In the highest scoring match so far, both Douglas and Fleming had multi point ends, but the Royals lead was eventually too much for the Knights to overcome.

The Saturday afternoon matches in the Women’s Draw tightened up the standings leaving almost all the teams in contention with three draws to play. Augustana suffered their first loss of the championship placing them in a three-way tie with MacEwan and Fanshawe. The Vikings loss came at the hands of a resurgent Douglas Royals team led Patty Wallingham and Kayla McMillian (both curling at 79%). Douglas scored in five of the first seven ends on route to an 8-3 win over the Augustana Vikings.

The MacEwan Griffins blitzed the Holland Hurricanes scoring four in the first end and two in the third to take an early 6-1 lead. MacEwan added several more single points on their way to a 10-4 win. The Fanshawe Falcons scored five in the first four ends but the NAIT Ooks got two back to make a game of it. The Falcons cemented the game with three in the seventh leading to an eventual 8-3 win.

The Humber Hawks rebounded from their tough loss earlier in the day by defeating the Fleming Knights 8-6. Fleming scored two in the first, but Humber responded with four in the second. Fleming evened it at 4-4 in the third end, but the Hawks scored singles in four of the next seven ends to seal the victory.