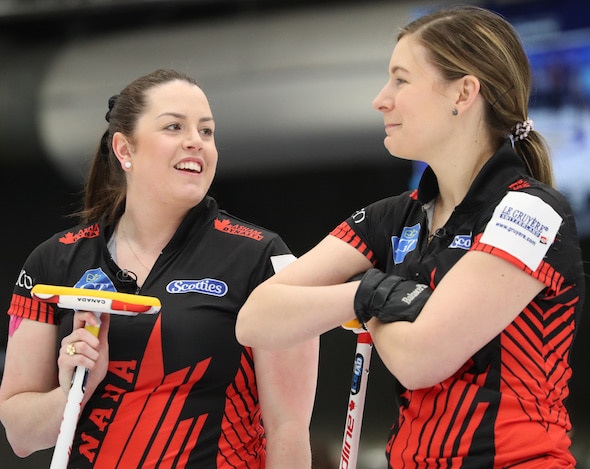 Canada’s Chelsea Carey team from Calgary scored a big four in the fifth end and sailed home with an 8-5 win over Germany’s Daniela Jentsch Sunday at the Silkeborg Sportscenter. The result left both teams with 1-1 records, but the win for Canada was more important from a confidence standpoint after a disappointing 7-6 setback to South Korea on Saturday night.

“It was huge to go out there (today) and get some confidence,” said Team Canada vice-skip Sarah Wilkes, who shot the lights out with a 95 per cent performance against the Germans. “It’s massive for our team; to get out there and have an idea of what the ice is doing and be a little more comfortable out there, less stressed, it’s definitely huge for our confidence.

“It’s a huge relief. Being at our first women’s worlds for the three of us (Wilkes, second Dana Ferguson and lead Rachel Brown), and getting that first win for Canada, it felt really great.”

For four ends, the struggles of Saturday night seemed to be carrying over as Canada found itself down 2-1 after Germany stole a point in the fourth end when Carey was wide with her last-rock tap attempt. 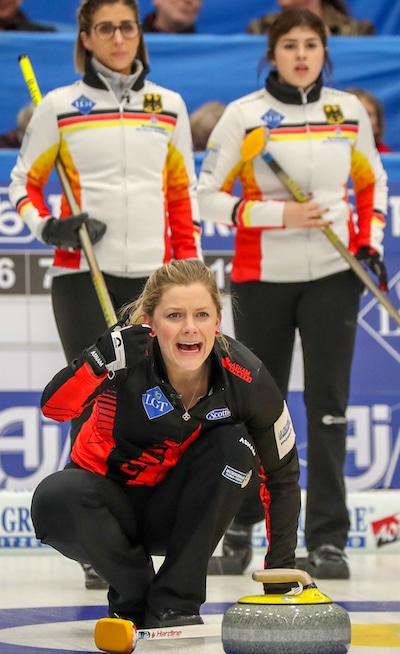 But in the fifth, it was sheer perfection from Team Carey — seven perfectly executed shots, and when Jentsch’s last-rock freeze attempt bounced into the open, Carey made it eight in a row with the open hit to score a game-turning four.

“We were due for eight (made shots),” said Carey with a smile. “When you make eight shots, good things happen, especially when you have the hammer. That was a big turning point in the game, obviously.”

And, potentially, a tone-setter for the Canadian team, as it went a long way toward erasing any lingering disappointment from the Saturday night loss.

“Losing the first game isn’t that big of a deal, as long as you respond properly,” said Carey. “You’re going to lose games this week; nobody will go undefeated. But you want to try to not lose two in a row at any point. We were just a little bit off (against South Korea), so we wanted to come out today and be just that tiny bit better. The first half, we weren’t quite there, but in the second half we got the communication going, we started reading the ice a little better and everything just got tighter, more precise, and that’s what we needed.”

The Canadians will return to action later on Sunday against Latvia’s Iveta Stasa-Starsune (0-2) at 2 p.m. (all times Eastern).