FREDERICTON (U SPORTS) – The Laurentian Voyageurs won the 2019 U SPORTS women’s curling championship, while the Carleton Ravens captured the men’s title. 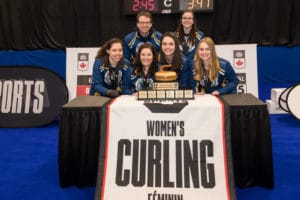 Laurentian’s Kira Brunton had to draw to the button in the 10thend to beat Brock’s Terri Weeks 7-5. Cameron Goodkey’s Ravens scored three in the eighth end on route to a 10-4 win over Memorial’s Greg Blyde. Schedule and Results In the women’s final, Brunton scored three in the opening end and then limited Weeks’ opportunities through the end. Brock was able to score two in the third, but the teams would trade singles the rest of the way. “It feels great,” said Brunton. “We knew the path really well and the girls had judged it a few times and we’d thrown it, so I was confident in it and I was confident in my girls.”